Jeep in a crate

This for me is an interesting model that I have wanted to do for a while. A few months ago I saw an advert for a 1/35 scale crate specifically laser cut for a Willy's WWII jeep. Intrigued I did a little search on the internet and the US did in fact export a number of jeeps to the UK in shipping crates. Following the war, some scam artists in the US obtained a large number of these crates (empty) and sold them to some unsuspecting customers with the promise that a surplus jeep was contained within.

Satisfied that this would be an interesting little dio to produce I decided to have a go at this myself, Unfortunately the cost of the wooden crate was a little too rich for my frugal modelling ways at $50 plus post to UK. Instead of paying this amount, I will attempt to hand make the crate from individual planks of some thin wooden sheets that I saved from an old Venetian blind that my wife had grown tired of. I also decided to order a Heller Jeep instead of a Tamiya or Italeri as I have previously built an SAS jeep from Tamiya and a follow me jeep from Italeri. The build logs for these jeeps can be seen here and here

This for me will be simplistic as always. The jeep will be built and positioned in a half opened crate with two mechanics looking at the instruction manual supplied with the jeep. One of them will possibly be scratching his head in confusion. That's it as far as the dio is concerned, I am hoping that sometimes "less will definitely be more". 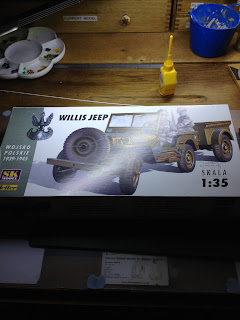 The Heller jeep is most definitely the lower end of the market in terms of the quality of the pieces. I would also point out that it is most definitely the lower end in terms of purchase cost as well. This one supplied from Jadar model in Poland cost around £6 which by anyone's standard I am sure is very cheap for a 1/35 scale jeep. I won't deny that it will require quite a lot of scratch building but for this project any of the other available makes of jeep would require the same amount of scratch building also. The extra bonus with this kit is that you also get a trailer with it! While this won't be used for this particular dio; I am sure that I will find a use for it at some point in the future.

The jeep itself, while devoid of a lot of fine detail does not actually require a lot of filling. There are a few sink marks (nothing major) and production marks that require filler, but there is nothing to shout about in terms of its quality. The one problem that I do have is from transportation or storage rather than build quality. Where the delicate seat support frame was a little too close to the box lid; they have become warped. I had hoped a little heat would allow me to bend them into the right shape, however this didn't work out as I had planned. I will probably make some new supports from some similar gauge wire. Work began with some sqaudron white putty and some sandpaper on some of the major parts of the vehicle. I don't want to fill every part of the jeep at the beginning as I don't really know at this stage what parts I will be using and what parts I will be fabricating from scratch. Below is a few of the shots of progress on the jeep build to date; 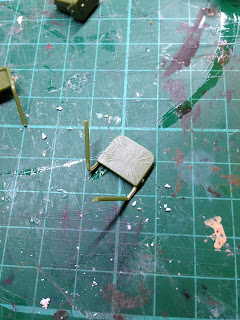 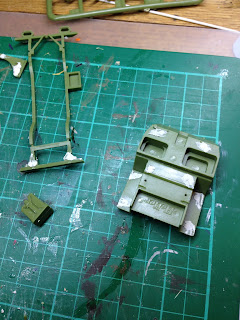 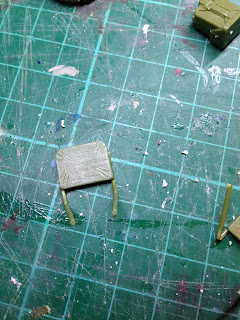 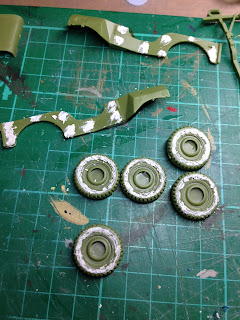