I'll never make one of those!


As far as my modelling hobby is concerned, I generally say that I will make almost anything that catches my eye, whether its a sci fi subject, military model or a anything else. However the one thing that I will not make is an aircraft or more specifically a fixed wing aircraft (I'm making a helicopter at the moment). For those of you that have read my short bio on my web site you will probably find that strange being as I have worked on aircraft from the tender age of 16 and now teach the subject of aerospace engineering at a University. 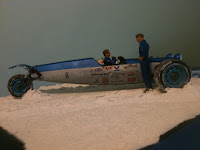 I suppose the reason why I won't build an aircraft model is because of my career. I make models predominantly to unwind from my job and relax. The last thing that I want to do following a long day teaching lift generation or aircraft flight controls is to sit at home and glue together a wing with separate ailerons! I don't dislike aircraft models and some of the models that I have seen completed on peoples blogs or images put onto twitter have simply blown me away in their detail and execution of the finish. But its just not for me, I cannot gather any enthusiasm what so ever to make one. The closest that I have come to making an aircraft is the salt flat racer that is shown here. Its a very cheap and basic ICM BF109G that I chopped, changed and converted to resemble a high speed racer that could have been used on the salts flats of Bonneville to try and break a land speed record. I enjoyed doing this partially because of the challenge and predominantly because the model didn't have wings!

If you are reading this and make model aircraft, then please don't think that I am not interested in the subject. I love looking at them, discussing the build etc. I just don't want one on my workbench. Not now, not ever!!

If you would like to read other sprue cutters thoughts on this hobby, why don't you check out these other members web sites: