This diorama started life as a holiday purchase that my wife found in a small hobby shop near Weymouth, England. "look Craig, this looks interesting" she said. Well that was enough for me to use this as an excuse to buy it! When the holiday was over I looked at this little kit once again and realised that my wife was correct (don't tell her that please!) It was an interesting little kit. I had originally intended this to be part of a diorama with a German vehicle where it would have been used to add interest and nothing more. After a little thought though, I decided to create a diorama around this kit on its own as I think that it will provide for an interesting subject.

The kit itself is as you would expect from Tamiya. Well molded, very well made and easy to assemble. In fact it only took one evening to put the whole thing together and get it primed. 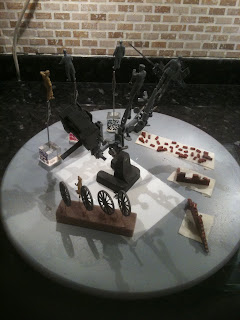 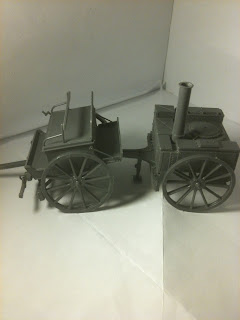 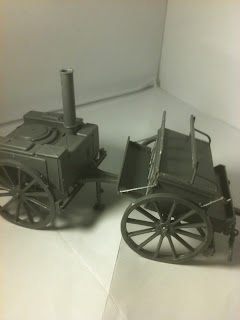 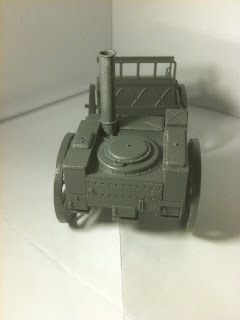 The kit also provides four very nice figures, two chefs and two hungry soldiers. I have also decided to add a fifth soldier who is depicted as relaxing with a cigar in his mouth from masterbox. For the scene itself I decided to use one of the many salvaged MDF pieces that I collect from basically anywhere I can get my hands on the stuff (usually for free). I then lay the pieces onto the board and decide on the lay out. This is then penciled in and any other major part of the dio is added. In this case I have utilised some Italeri brick wall that I had badly made a long time ago and consigned to the spares box. The wall was cleaned up, primered and re-assembled onto the base to represent the ruins of a small building.With all of the parts decided upon I then place them in the rough positions and take a few photographs top remind me of the layout later in the build. 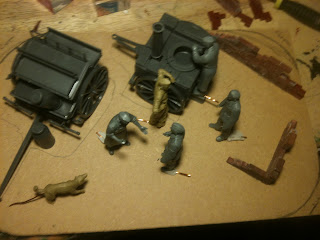 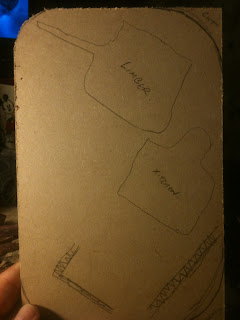 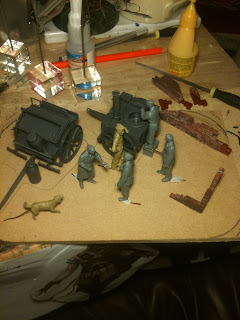 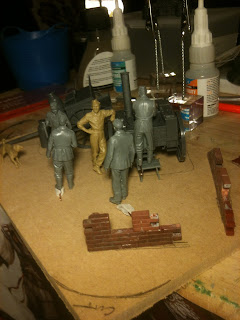 When I make a dio using MDF I don't usually like to leave it in a square shape for two main reasons: usually the scrap piece is not a perfect square or rectangle and it's a lot of blank space that would have to be filled. On the photo to the left you will see that I have written the word "cut" in the corner. This is only one of a few curved cuts that I will make to the wood to create a shape that encompasses the scene without making it too large. The base cut, I then tuned my attention to the walls of the building. Following a clean up and rub down, I re-painted the walls in primer grey and then dry brushed the red brick colour on so as to leave the grey primer in the gaps to represent the cement that holds it all together. I must say, I am really happy with the result. The walls were then pinned and glued into place on the board.

For the floor section of the house I elected to try and make a tiled floor myself. It was not going to be anything fancy or extravagant so I thought what the hell, why not give it a go? I used some scrap balsa to make some wooden shuttering and poured in some polyfiller. Once dry I then mixed some more polyfiller and stippled this onto the rest of the board to simulate some rough earth. Once this had dried I then simply scoured some diagonal lines into the surface of my new floor and painted in grey primer. The tiles were then dry brushed in various colours to represent some old and battered floor tiles. the kitchen was again placed onto the base for placement and then some woodland scenics static grass was applied in various places following a few washes of various browns to the groundwork. For the building I used the rest of the Italeri bricks that I had along with some scatter material to represent rubble. Some off cuts of balsa wood added and I am happy with the result so far. 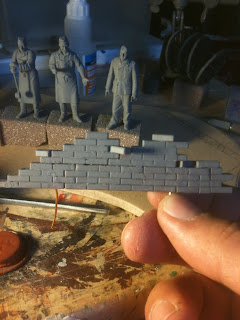 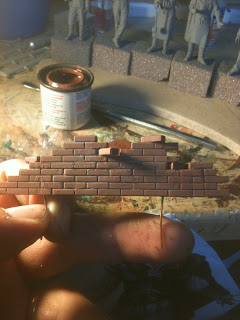 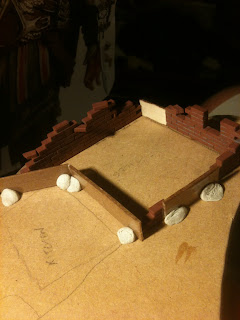 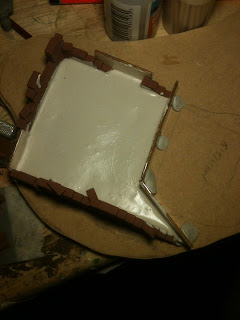 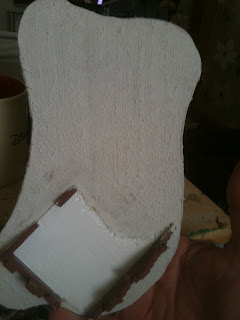 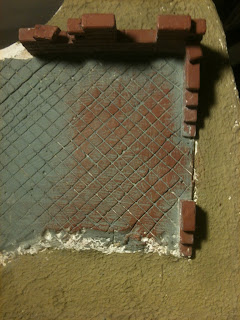 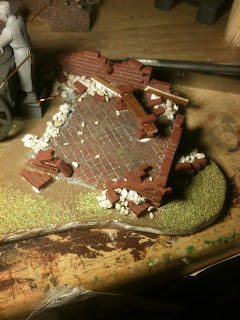 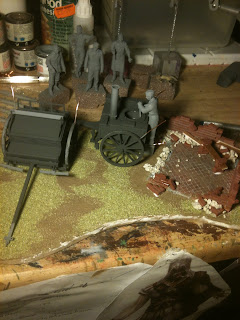 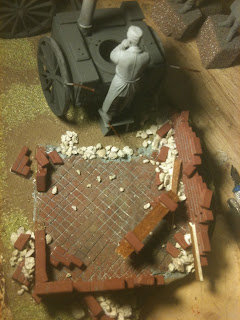 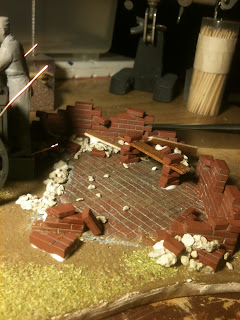 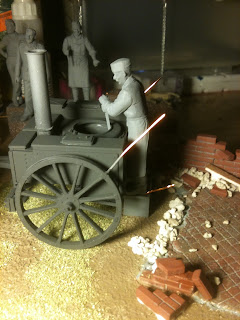 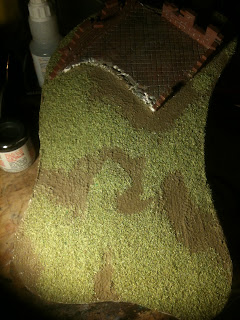 The figures will be painted in Humbrol enamels and finished in oils as per usual, however  was really not happy with the groundwork that I had produced, The grass was too green and too short and the earth too monotone in colour. I added a further layer of woodland scenics autumn mix grass to the base and drybrushed further shades of brown onto the earth before adding some pastel chalks in various shades to the grass and the earth to give the variation that i wanted to achieve. For the building I treated it to the same process as the earth and grass with various shades of enamels, oils and chalks until I was happy with the results. The rest of this diorama came together really well with no problems what so ever. This is a huge shock to me as something nearly always goes wrong with one of my projects. Anyway I hope that you like the diorama and the finished photos are below. 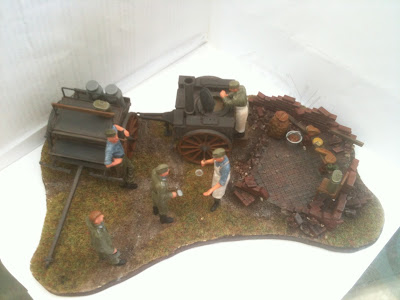 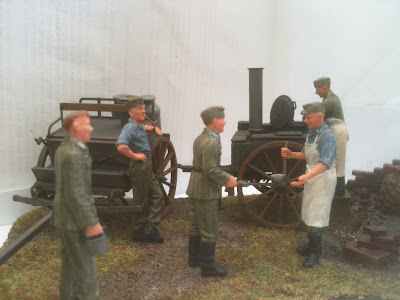 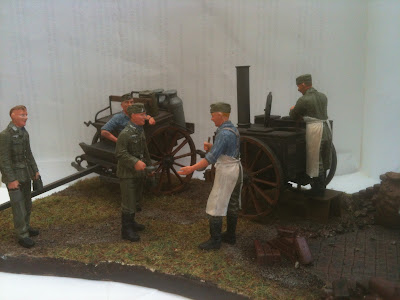 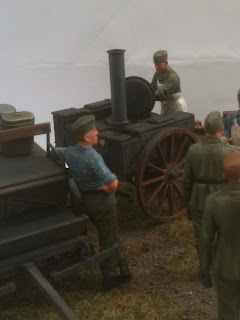 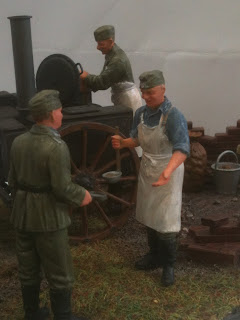 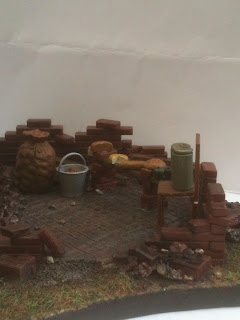 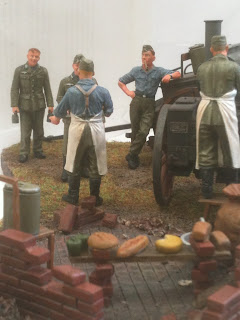 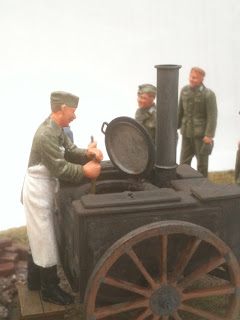 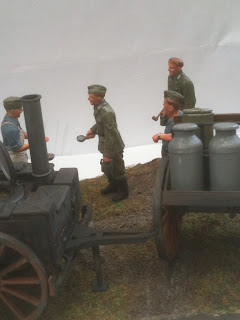 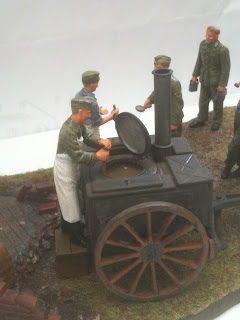