I'm going to start this article by freely admitting how annoyed and disappointed I am with how little Harder & Steenbeck must think of their customers! The reason for writing this article was a tweet shared with me by someone who I follow and I follow back on twitter. It was a video from Angel Giraldez on Youtube (this article is in no way intended to, or insinuate that Angel Giraldez is in any way to blame for this) seemingly advertising his new "edition" of the Infinity CR plus. Here's the link.  Now watch this video and imagine that you have just purchased the Infinity CR plus V2 like I did for over £200 (233 Euro's) just 3 months ago. Imagine that you bought this airbrush after reading what they say about their airbrush:

The high-end airbrush instrument for professional artists not only sets new standards in design, it also offers intelligent functions and ergonomic excellence. The Quick Fix, with its engraved scale, allows even more accurate paint-flow control. The lever resistance can be individually varied. The open needle cap ensures permanent control of the needle tip. The Infinity solo is supplied with a 0.15 mm self-centring plug-in nozzle. The Two in One version also includes an additional 0.4 mm nozzle and larger paint cup.

For clarity I purchased the Two in One version so I had more adaptability for painting. One of the other reasons for purchasing their airbrush was the sheer volume of advertising and reviews extolling the build quality, design excellence and value that this airbrush would offer. How could I say no? Well according to the video I should have! Here's a bullet pointed list taken from his video on why the original Infinity CR plus is inferior when compared to his re-design:

From this point forward I really started to get annoyed: 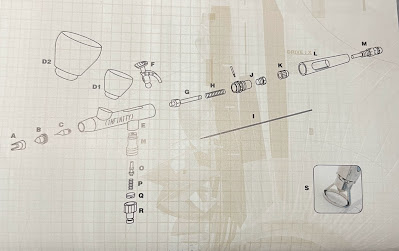 after all this he then introduces some new "sketching caps" for model making which I will freely admit look excellent for figure painting but he still isn't done with rubbishing the original CR Plus, oh no! He has to finish by pushing it aside with a lightening effect as if to emphasise how bad this version has now become.

The finish of the video is a short image advertising a free needle with the purchase along with two free "how to" videos by the author of the video Angel Giraldez.

Now I want to be very clear here: This article is in no way intended to cast any ill feeling or anger towards Angel Giraldez. Before today I will be honest and say that I had never heard of him (he moves in different model making circles to me). I agree that his design modifications to the Infinity CR Plus do improve the airbrush (based on his descriptions and video) and I will go as far as saying that I wish this brush had come out sooner than it did. If it had I would have bought this version for the clear improvements alone. When I asked him on twitter:

"do you think Harder & Steenbeck should do something for their customers who have obviously bought a substandard product based on your redesign and comments on the original CR Plus?"

"Infinity CR Plus is a great airbrush, I have painted many 28mm figures using this airbrush and its really accurate. You have a great airbrush, don't worry (smiley face) This new version has been improved to paint with my painting method, of course" 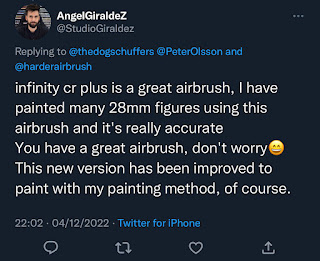 screenshot of reply from Angel Giraldez

I find it odd that if the Giraldez brush was designed for a specific painting method; then why not make that clear in the video on youtube? Why go to such extreme lengths to highlight all the "faults" with the original Infinity CR Plus? Why not simply state that this is a special edition of the Infinity designed specifically for painting war gaming minis and leave it at that?

What I am absolutely disgusted with is Harder & Steenbeck. I would assume that the design of the airbrush and Giraldez's video would have passed by their marketing department before being made/named/published. My questions to Harder & Steenbeck are:

Why continue to market your Infinity CR Plus as a "high end airbrush instrument for professional artists with ergonomic excellence" even though one of your own designers happily points out at least 9 design faults that needed improving!

If you purchased a "flagship" airbrush from a company for over £200 (Euro 233) only to hear the manufacturer 3 months later point out everything that's wrong with it and offer a new version. Would you be happy with your purchase?

Are you admitting fault with your Infinity CR Plus V2 and will you be offering the Giraldez version as a replacement?

At the time of writing this article the video has only been on youtube for 24 hrs and it already has 7.9K views. I wonder how many more owners of the original Infinity CR Plus are watching and feel as I do?

I am of course writing a letter of complaint to Harder & Steenbeck along with sharing a link to this article. I have also tweeted them in the hope that they will answer the questions that I have posed in this article. If you own an Infinity CR Plus and have purchased it in the last 12 months; please contact them and ask them the same questions as me. If you know someone who has bought one then please share this article with them.

Thanks for taking the time to read this and lets hope that in future a company that relies in part on the model making community doesn't treat them so badly in future!

Email ThisBlogThis!Share to TwitterShare to FacebookShare to Pinterest
Labels: airbrush, harder and steenbeck, infinity CR Plus