The Creality Ender 2 at the time of my getting around to writing this article is now unfortunately out of production. I have read a few reasons for this but the most plausible are that the demand for smaller printers had dropped and the company (Creality) ended production in favour of a larger printer (The Ender 3). For me, I bought this printer right at the end of the production run and despite the larger Ender 3 and huge CR-10 being available this was the one for me. Why? Simply it was the small form factor. This printer is minute when compared to other printers out there. In addition it has the capability to print in PLA, PETG and ABS including all of the various iterations of each of the filaments. It does however have some drawbacks: Its a cheap printer to buy and therefore some of the parts have a lot to be desired in terms of quality. This didn't really concern me as I fully intended on modifying it as I began to use and understand how it worked. The added bonus to this is that the model making community is HUGE and there's a wealth of information and modification choices to choose from to suit your own needs. I have made the decision to still document what I have done to my printer even though as its out of production now as Creality sold these by the thousand so there are still plenty of them around for purchase second hand and they are still very easily modified/repaired.

The machine in its most basic form is still an excellent bit of kit out of the box. The first test print that I tried came out perfectly without any adjustment or fettling save for levelling the bed (every printer needs this) and assembly of the machine when delivered. I was impressed that a sub £100 machine could perform so well. There are some obvious issues with the basic machine though: The gear that feeds the filament aside from the metal gears themselves is made from plastic that will wear quite quickly and probably fail when you least expect it. The screen is placed flat on the control box meaning that you have to look directly down on it to understand the display. This isn't a huge issue until you realise that at some point your going to head butt the Z axis mount when you do this! The power supply is a separate item and after reading some reviews is normally poorly wired at manufacture that can lead to failure and/or shorts. 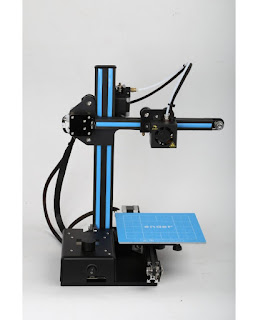 While waiting on delivery of the printer I had previously viewed a video by Fugatech  on youtube. He had designed a number of simple upgrades that reduced the form factor of the machine even further by placing the power supply under the machine and raising the machine on small legs to accommodate this. He had also realised that the screen location was an issue so he designed a mount for it that raised it to a more accessible angle. Even better than this he released his designs on thingiverse; a free 3D printing design website. By the time the printer arrived I had printed out the legs, case for the power supply and screen case on a friends 3D printer and in short order had completed these upgrades within a week of taking delivery of my printer. The next modifications were just as easy and I would say essential. I bought an interface that would enable me to re-flash the firmware on the machine. This isn't as hard as it may sound as there's loads of videos and help guides online to help with this. There are also quite a few choices of firmware to choose from to upgrade to. For the most part a firmware flash is there to provide additions to the code of the machine that will enable upgrades but there is one important reason to do this to a standard Ender 2. It doesn't have an overheat safety cut-off in the original firmware meaning if the thermistor reading on the heated bed overheats the machine won't switch off. This as you can probably imagine is not something that you would want happening so I immediately performed this upgrade.  What then followed was a series of parts changes to improve the overall performance and longevity of the machine:

While each of these upgrades increased the performance of the machine in small but meaningful increments they were not as expensive as you would imagine. The most expensive upgrade I performed was the replacement of all three of the fans on the machine. While Noctua fans are expensive in comparison to many other brands I cannot fault their quality and performance levels. I would estimate the total cost of all of the upgrades listed above to be around the £45 mark. By far though the very best upgrade to my machine was probably one of the cheapest: Automated bed levelling. This involved replacing the bed springs used to adjust the level of the bed with solid aluminium posts and the inclusion of an auto bed level sensor. This is a cheap (£3- £5) inductive sensor that's wired using a transistor (lots of DIY guides out there) and a change in the firmware. Essentially this will tell the machine to self test its own level before every print so that it knows the position of the extruder in relation to the bed at any point in the print. In plain English you just tell it to print whatever is on the memory card and the machine takes care of everything else for you!

My only regret is that I didn't photo document the modifications for my machine as I was completing them so that I could create a more in-depth modification guide for my web-site however there is so much information out there including further upgrades there wouldn't really be a lot of difference that I could make. What I will say is that if you have stopped buying a 3D printer because your not very technically minded then don't let that stop you. I went from not knowing anything about 3D printers to being able to operate and then comfortably modify one in the space of 6 months. In 12 months I had progressed to being confident enough to buy a resin printer and operate that as well. The wonderful thing about the internet is the wealth of information and willingness of people to help you. So whats stopping you? Go get one!!