It's been a while since I've had a chance to update my site yet alone make a model! Major house renovations coupled with a promotion at work has eaten into a lot of my time lately. Hopefully with the house work completed I will be able to make the time to get back to my model bench. In the interim I do still like to make a few little projects to satisfy the craft/art side of my personality:

A few days ago while cleaning out an old cupboard I found an old collection of coins that I have had for almost 20 years. After a quick look on the Internet to establish that all of my coins gave me a grand total of under £10 and that I didn't have a rare one that was about to buy me a new Range Rover; I started to think about a use for these rather than just throwing them in the back of the cupboard once again. It was then that the idea sprung to me:- some of these would look good as cuff-links! A brief Internet search revealed that I was of course not the first person to think about this but the prices that some people were asking for these were absolutely ridiculous.  It was at this point I decided to have a go myself.

This is something that I cannot stress enough CHECK THEIR VALUE! While the coins that I used were not worth more than £1 each, some coins are literally worth thousands and are extremely rare. If your lucky enough to find one of these please do not do anything with them.  I should also point out that making these cuff-links will destroy any value that the coins have. OK warnings out of the way, you need to select a coin that looks appropriate against the shirt that it will be eventually worn with. Too big and it may not look very nice although this will of course be down to your own personal choice over anything else. 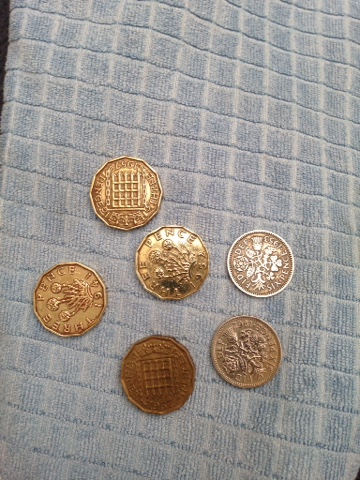 I bought six pairs of chrome cuff link backs from eBay for a total of £1.99 which in my opinion was an absolute bargain! I was also very surprised at the shear amount of choice on the usual sites such as eBay, Amazon, etc. More about prepping these later.

There are loads of different guides on the Internet for cleaning coins but in the end I just decided to go ahead and polish them using my Dremmel as l didn't have to worry about chemical reactions from vinegar and salt or explaining where the coke has gone from the cupboard!

When I purchased my Dremmel I also bought an accessory kit to go with it. The kit included some polishing tips along with a tub of polishing soap. Coins in hand, Dremmel set up and a cup of cold water to hand to cool the coin as I'm polishing it. The condition of the coins considering their age was brilliant. I could go on about the "good old days" or "they don't make things like they used to" but I'll resist. I will say that the quality of the metal is far superior to modern coins so I'm not sure how a modern coin would stand up to the polishing process. When I figured out that the coins wouldn't give a better finish than what I had already obtained I used a small rotary plastic brush to clean off the excess polishing soap from the coins surface and then gave them a final finishing polish with some Brasso. 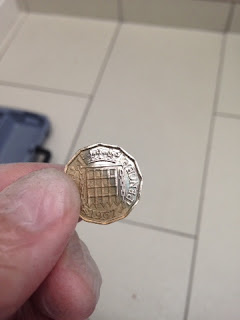 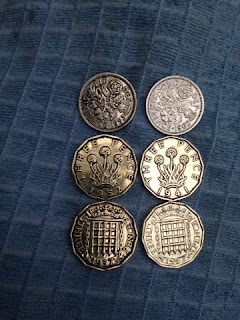 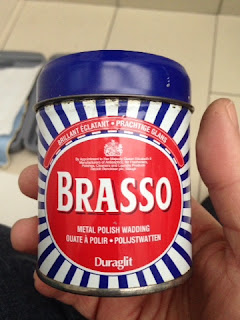 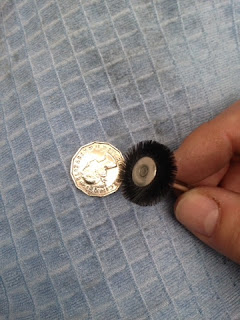 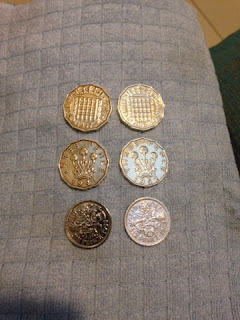 Again I can't stress this enough. Read the instructions for the adhesive very carefully. It doesn't matter how good the adhesive is; if you don't prepare the surface properly it won't work as you expect. I used JB Weld which I can't recommend enough. The key things for a good metal to metal bond are that the metal should be corrosion free which is taken care of with the polishing, that the surface should be rough to provide a key for the adhesive and that it is appropriately de-greased. For the side of the coin that I selected as the back I used a small cutting bit on the Dremmel and removed enough surface detail to provide a good face to face bond. The next step was using a small cotton bud soaked in some acetone to clean and degrease the surface. I also cleaned the surface of the cufflink backs in the same way and mixed a small amount of the adhesive and placed the both pieces together. The next part is the easiest: don't touch them for 24 hours while the adhesive cures. 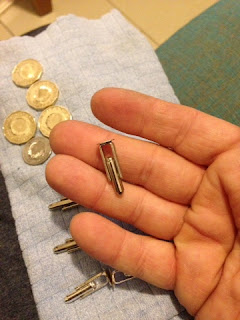 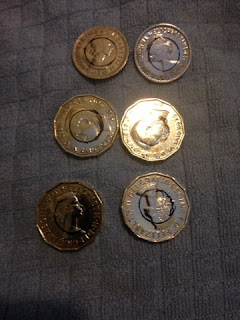 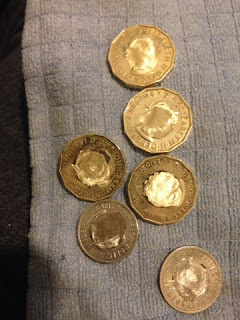 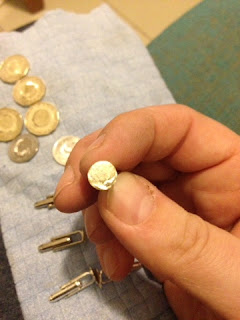 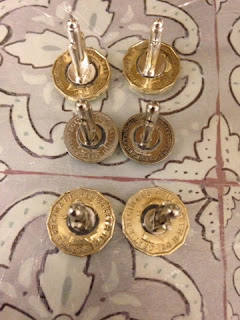 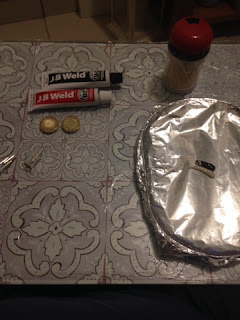 The last stages are using the Dremmel with a very fine grinding tip to clean up the adhesive joints on the back of the cufflinks. I suppose it's not really necessary as these always face the shirt and don't show when worn, but I wanted a clean as possible finish on them. I also poked some holes in some old cardboard to mount the cufflinks onto and then gave them a coat of clear gloss lacquer. This again is personal choice. I opted to do this so that the shine I gave the coins would remain without my needing to polish them again. 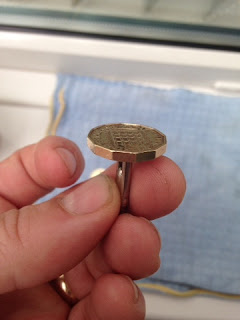 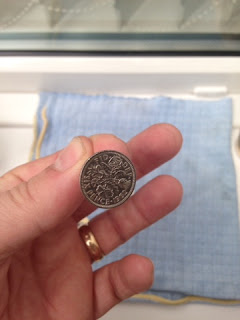 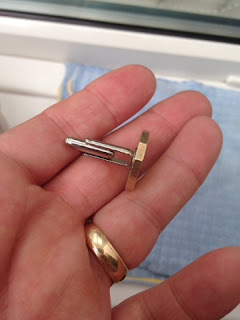 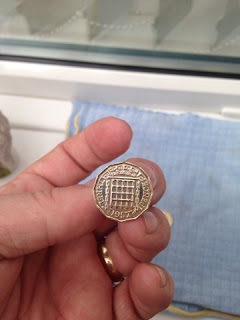 I know that this is an unusual page on my website in comparison to my usual model related posts but it's nice to use my tools and materials that I normally use for models for another type of project. I would also add that as well as being practical for me to use, they could also make really personal presents for someone especially if you manage to find a pair of coins with the year of someone's birth or another important date? As always I love to hear your feedback and would be happy to answer any questions you may have. 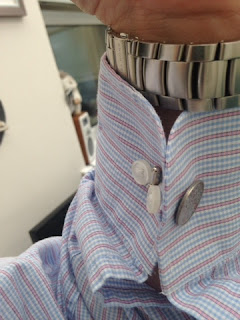 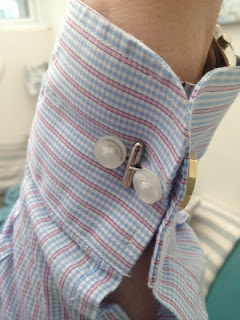 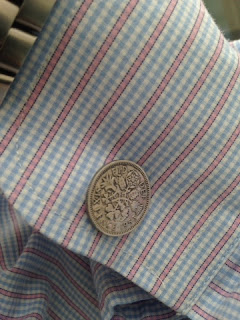 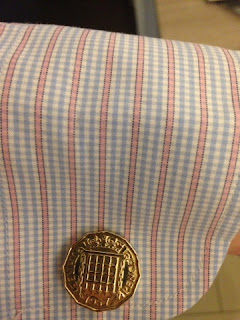 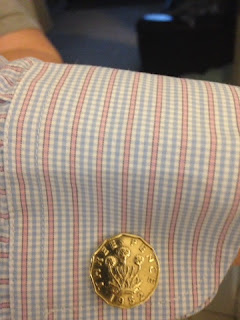 I mentioned that these could be made to symbolize a memorable date/event. I decided to "put my money where my mouth is" and try something like this. Here's a set of commemorative WWII robin farthing cuff links all polished up and looking absolutely fantastic in my opinion: 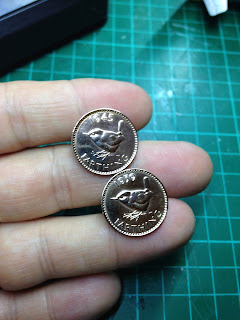 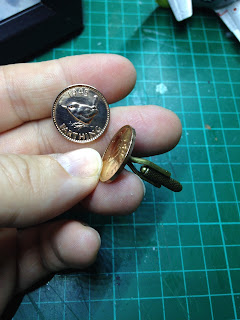