This is my third outing for the sprue cutters union and as the title says, what is your favorite model ever assembled? I have had to put alot of thought into this as a quite a few models spring to mind. If I am really honest then all of my models are my favorites as they represent many hours of enjoyment in their assembly and setting. However I have decided that my Opel Blitz has to be up there in my top three and with the story behind it, it must be regarded as my favorite at this moment.

So what is the story behind it? I hear you ask. Well put simply, it was one of my biggest cock-ups to date that somehow managed to become one of my best (in my opinion) little vignettes. The model was one of the first 1/35 kits that I bought. This was around twelve years ago and back then I could pick up the odd kit in my local news agent.

The kit itself (an Italeri) didn't immediately jump out at me being as it was just a plain German WWII Flat bed truck. The price did jump out at me though. I can't remember the exact price but I do remember a little bird making noises in my mind (cheap, cheap). So homeward I walked with an Italeri Opel Blitz under my arm, wondering what I was going to do with this thing?


The build itself was straight forward enough. I did not use any etch detail sets, I did not bother with detailing the engine and just started putting this truck together with a little enthusiasm. This is the point where the cock-up occurred. At the time I was using a spot lamp with a standard 100 watt bulb to illuminate my work area. I left the truck cabin on my work bench, the grill facing the lamp and went to make a coffee and have a cigarette. When I returned to start some more work, I realized that the cabin had been left too near the bulb and the thin plastic grill had melted and distorted with the heat!! Completely annoyed with myself and with very little scratch building experience or ability at the time, I placed the truck back in the box, put in my shelf and forgot about it for around two years.

After two years of this truck gathering dust, and a wife who was getting more and more annoyed at the state
of my models in storage, I had a bit of a sort out and came across this truck once again. This time I looked at it with some fresh (and more enthusiastic) eyes and formulated a plan to redeem this kit. I purchased an Italeri workshop tool set and started to put everything together. For the truck, I opted to cut the engine bay doors off and display them open and also cut the cabin doors to display these open as well. I decided to discard the fabric cover for the back of the vehicle and place one of the sides in a down position. I had intended to repair the melted grill, however after applying a little paint to the front, I realized that it looked more like a battered old truck that had seen the back end of something a lot larger (maybe a Panzer?). To add to the old and dented effect I actually sat the sides of the truck bed in front of a hot lamp as well, to bend some of the metal strengthening bars of the truck. I opted for a plain grey paint finish for the Blitz and then began to add as many of the parts from the field tool shop as I could realistically fit onto the back of the body.

For the figures I used up some of the spares that I had accumulated over the years. The figure standing up is a Tamiya bicycle rider, the sitting officer is from another Tamiya kit (can't remember which one) and the chap sitting on the roof came from a Tamiya Kubelwagen kit. Some heavy weathering and a few other bits n pieces from the parts bin and a workshop truck was born!

For the placement I again wanted to keep it simple and decided to use a base that I had made for a larger 120mm figure, however the truck just about fitted on the base and after "spilling" a little mud over the edges of the base the whole thing seemed to blend together.

This is my favorite model as it reminds me that no matter what happens in the build of a model, it can always be turned around, it just takes a little time and thought to change your plans slightly and you can produce something quite unique. It also reminds me to never throw anything away as it can always be used in the future. I hope that you have enjoyed this little trip down memory lane as I have and that it inspires you to look at some of the kits gathering dust in your storage area. 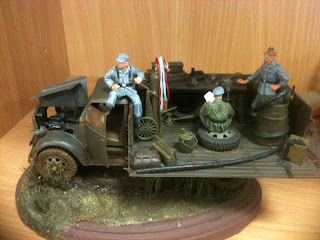 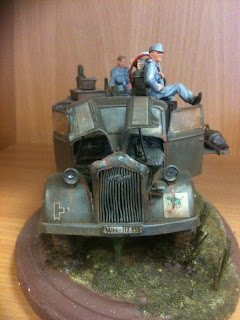 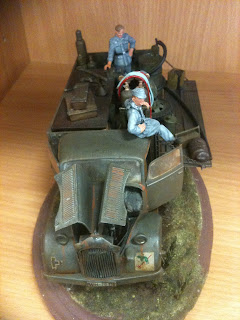 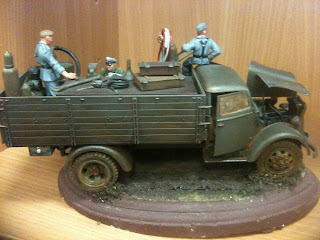 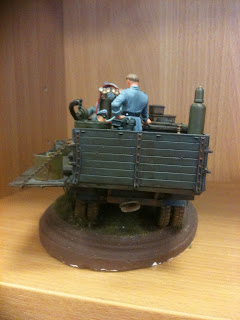 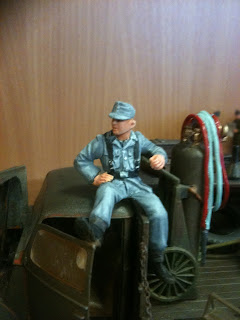 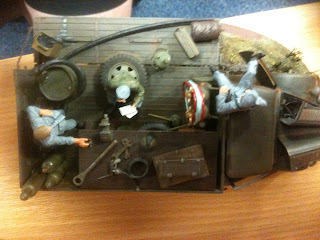 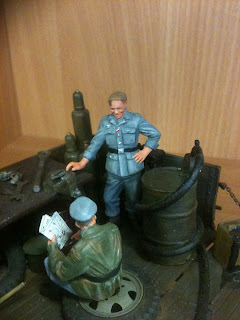 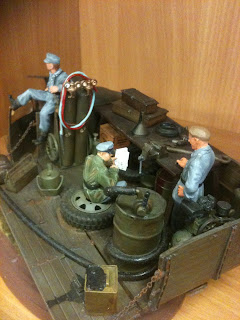 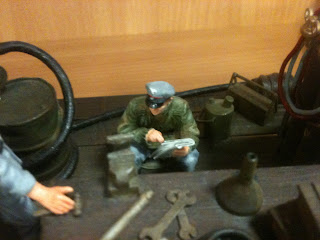 want to see more articles like this? Check out these blogs: