This is my Battle star Galactica Viper MK II manufactured by Monogram/Revel. This is one model that I actually sought out to buy which is unusual for me as the majority of my collection is impulse buys. The kit itself is reasonably priced and after many hours of research (watching the entire series on DVD again!) I can comfortably say that this kit is a very good representation of the "real thing". I did add some modifications to the kit as I progressed through the build, but these were more for aesthetic reasons rather than ensuring 100% accuracy to the shows vipers as they seem to change in design slightly as the seasons went on. In terms of additions I have added ejection handles to the seat in the cockpit, drilled out the vectoring thrusters that are positioned around the airframe as the kit versions are decals. I have drilled the front cannon barrels, added some pipes to either engine and at the rear of the airframe beneath the engines I added a panel and some pipes to what is a very plain area.

The build of the kit itself is simplistic and one can imagine the amount of additional detail that can be added if you wish. I have seen some wonderful examples on the Internet that have lit cockpits etc, Indeed there are lighting kits and etch sets available on the Internet if one was that way inclined. I would point out that before you build this ship, ensure that you have a bottle of micro sol or a similar decal softener as you will never get the decals to wrap around this kit without them. In terms of paint used, I have primered the entire aircraft in grey acrylic car primer, sprayed the ship in Tamiya white and other colours are from the Humbrol range. for the weathering I have used Humbrol white over the top of the red deals to depict paint chipping and wear. for the remaining weathering I have used an artists graphite only pencil (a large stick of graphite without the wood around it). As you can probably notice from the photos, the ship is not 100% weathered yet and I tend to revisit this every few weeks to progress the weathering as it is a tedious job.

For the base I simply cut two pieces of foam board in identical sizes and shapes. the corners have been cut to depict the trademark shape of the paper used in the series. A third piece of foam board was cut to go between the other two pieces. A simple case of gluing them all together gave what I think a good representation of a "Battle star" loading lift. The whole platform was sprayed in grey primer, coated with Humbrol Matt Varnish and then diluted lamp black oil was liberally spread across the surface to provide some age and wear.

To leave no doubt in the observers mind of what they are looking at, I used the decals that are provided for the kit stand to denote the viper model and what battle star it is based on. As a final step I added the Galactica emblem that is also provided by Revel.

As I have already said this is very much a work in progress, however this model is at the stage where I would consider it as being 95% complete. I hope that you like my interpretation of such an iconic TV show ship. 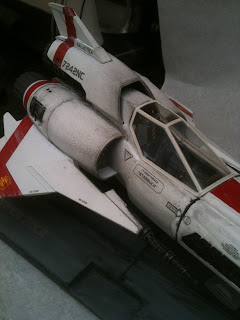 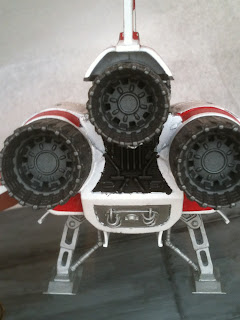 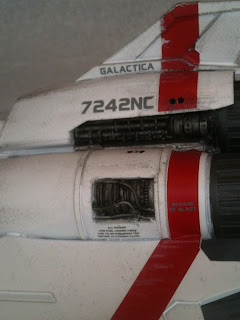 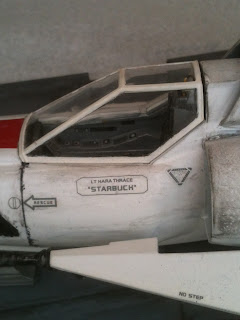 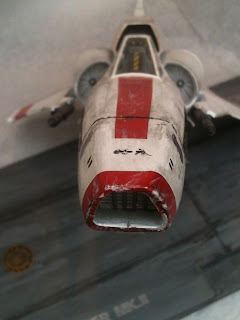 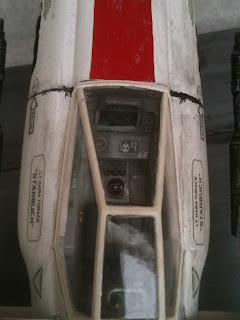 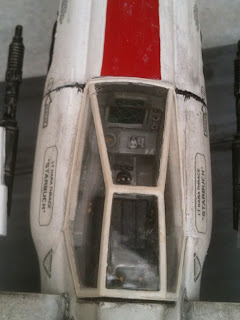 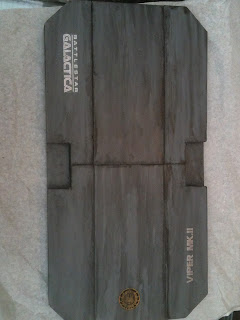 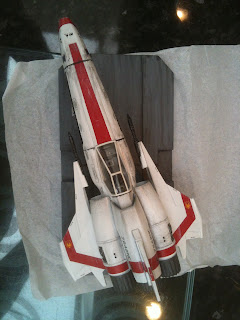 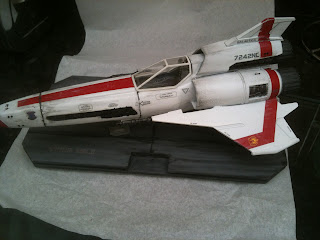 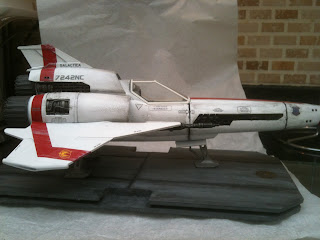 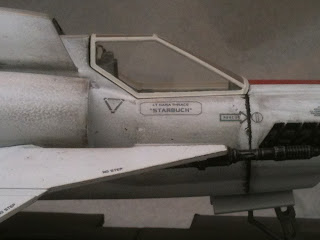