This is another one of my old projects that I never quite finished. Its the Master box 1/35 8th Pennsylvania Cavalry 89th Regiment Pennsylvania n Volunteers depicted in charge at the Battle of Chancellorsville on May 2nd 1863. The kit comprises of three riders in various poses with one of them carrying a very nicely depicted flag: 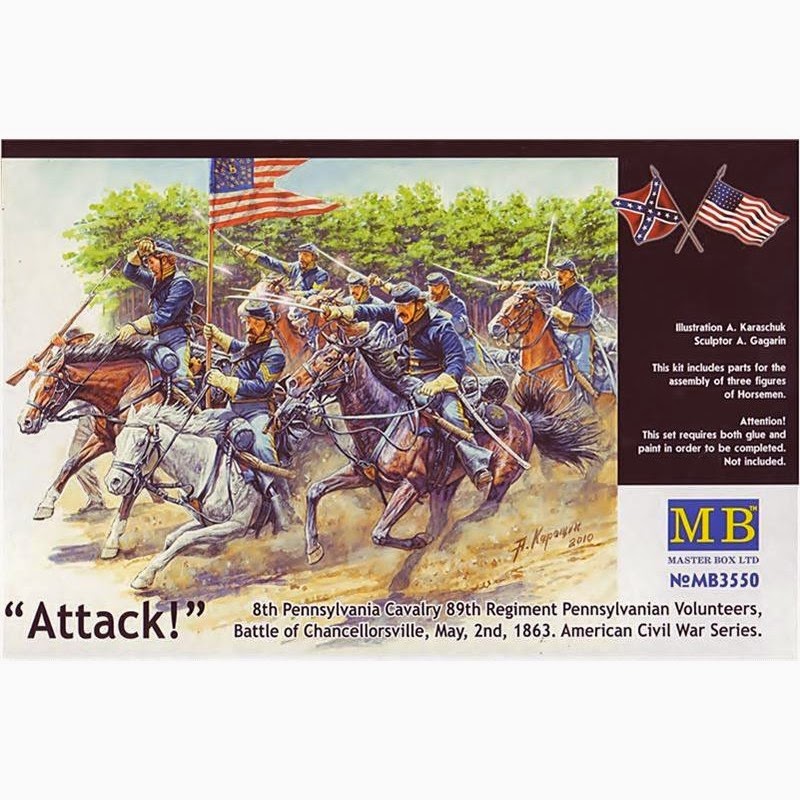 I had purchased the kit really because I had never constructed an American Civil war dio and I had assumed that it would be a welcome break from my usual World War two subjects. When the kit arrived I remembered being impressed with the detail and movement of the figures. So much so that I elected to buy a second kit and modify the riders so I could have six cavalry in the charge as opposed to the two supplied.

The concept for this dio was simple; six riders in full charge over a grass field. After carefully looking at each pose of the riders and horses I decided to put a large fallen tree trunk onto the base (found whilst walking the dog) to depict a horse in mid jump over it while the others horses would be shown ahead of it in full gallop.

Like so many of my other "stored" work in progress kits, I ran out of inspiration with a rather sad looking grass finish on the base and not the finish that I had wanted on the figures and horses. Of course I knew how to rectify it, I'd just ran out of enthusiasm to do it. Well here we are a few years later and my interest has been renewed with the construction of my home made grass applicator. (click HERE for details).

As I mentioned in the introduction, my decision to re-start this project came from the production of a home made grass applicator. I had finished building it and needed a test base to give it its first trial. the first base that I came across was that of the cavalry charge and after successful trial of the applicator I decided to finally finish the cavalry. Unfortunately I didn't package the figures well for storage and they sustained some damage in the form of damaged paint finish and snapped legs, flags, etc. First order of business was the repairs to the existing figures as depicted in the photos below: 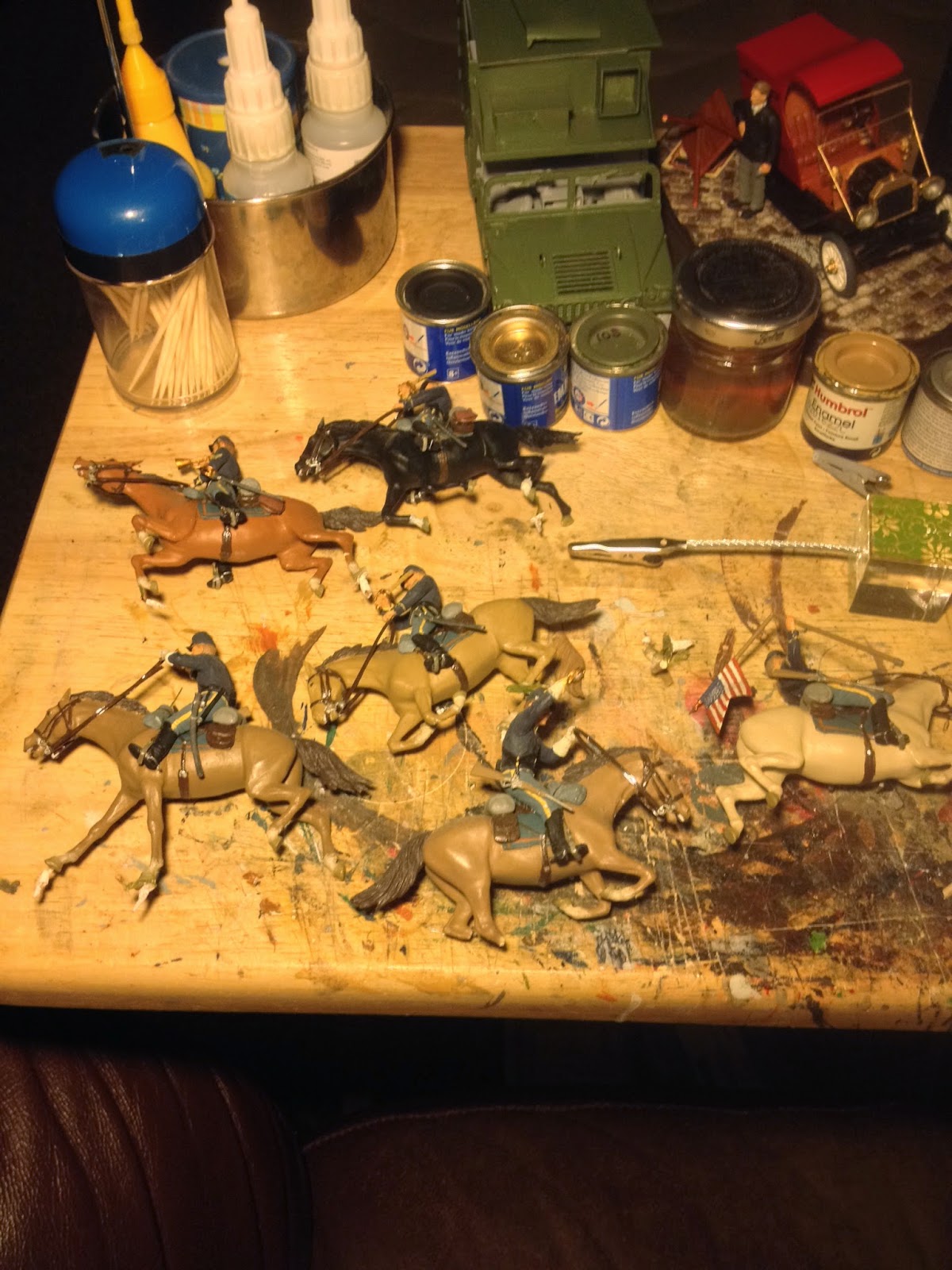 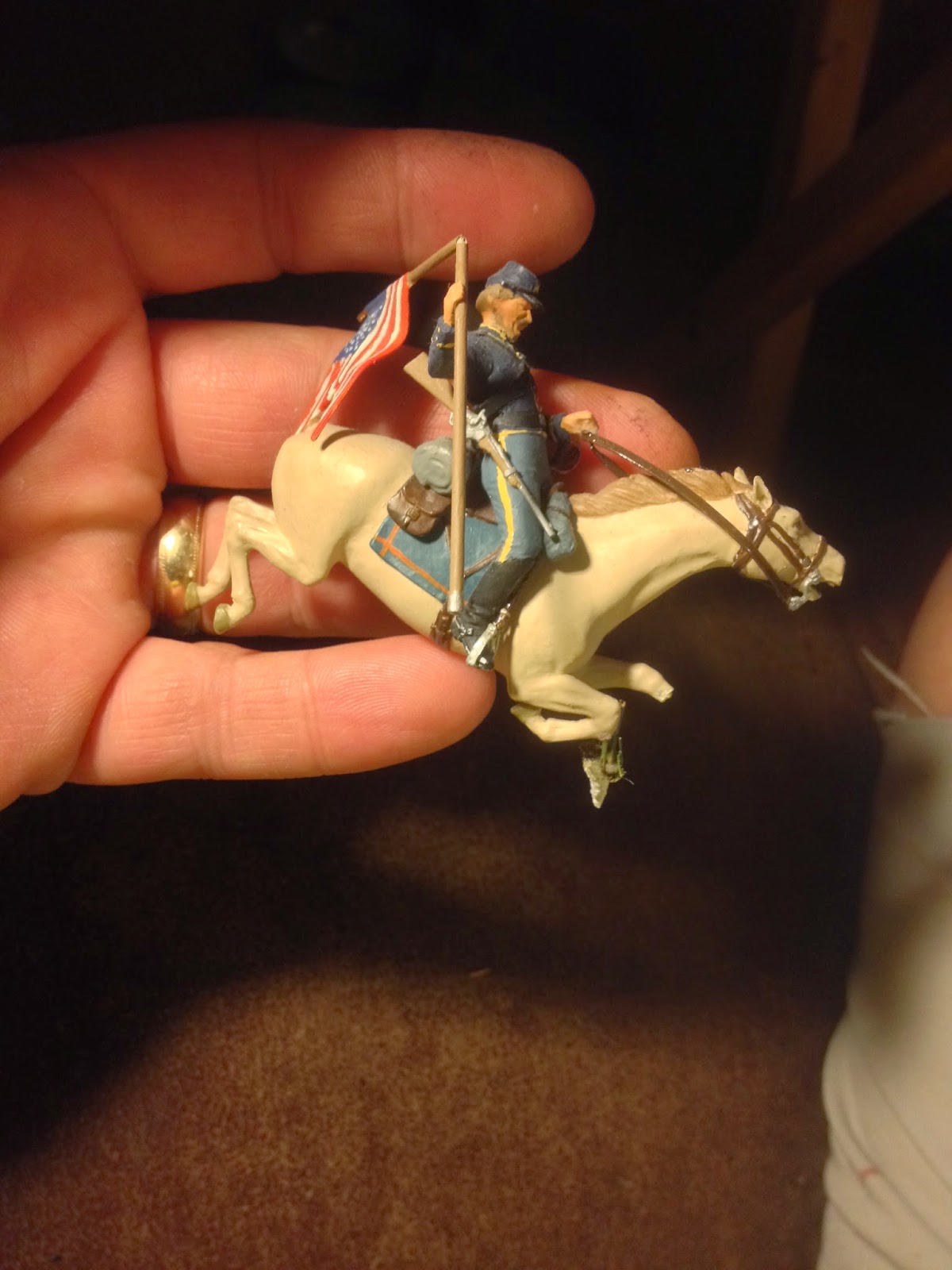 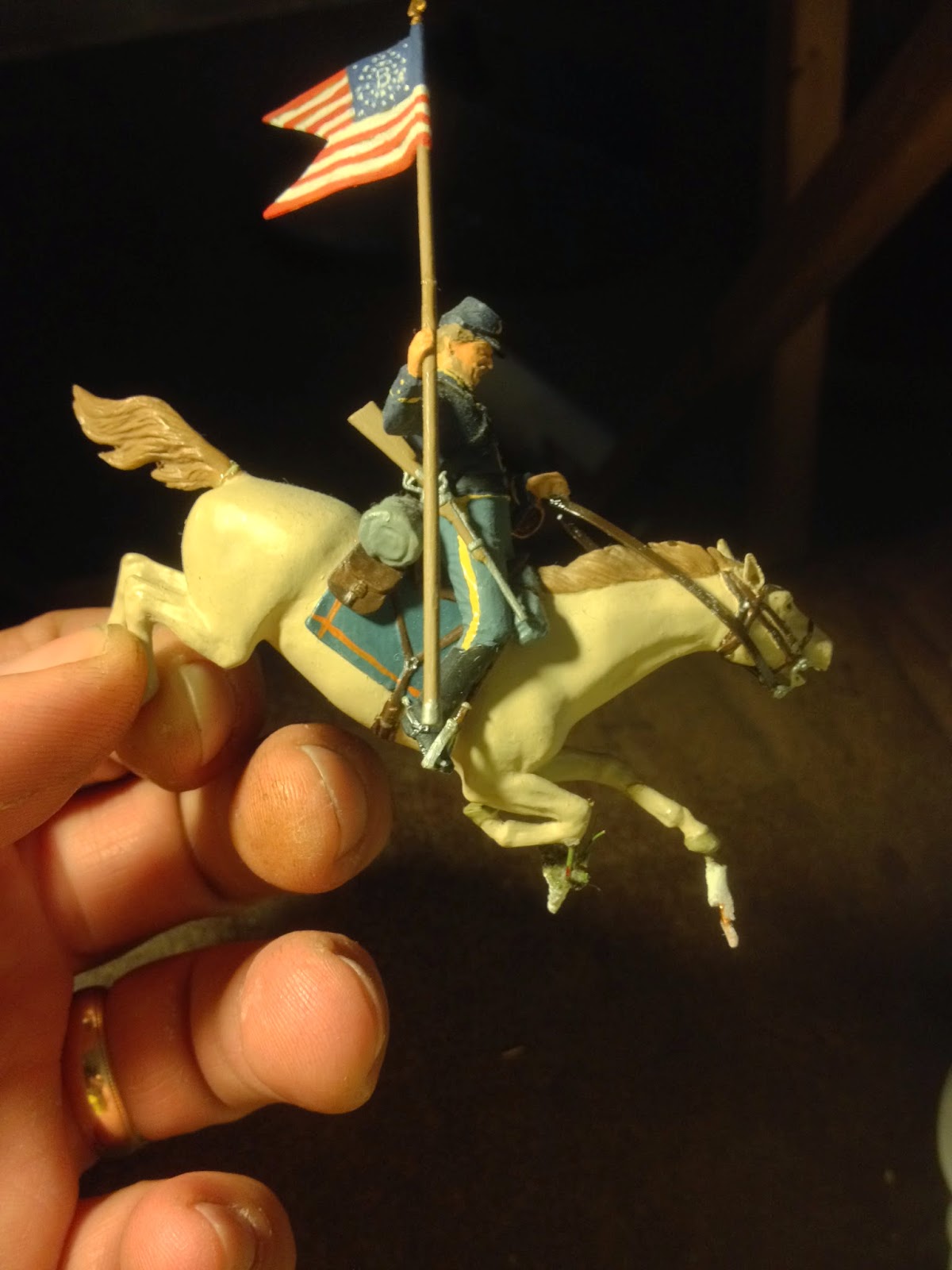 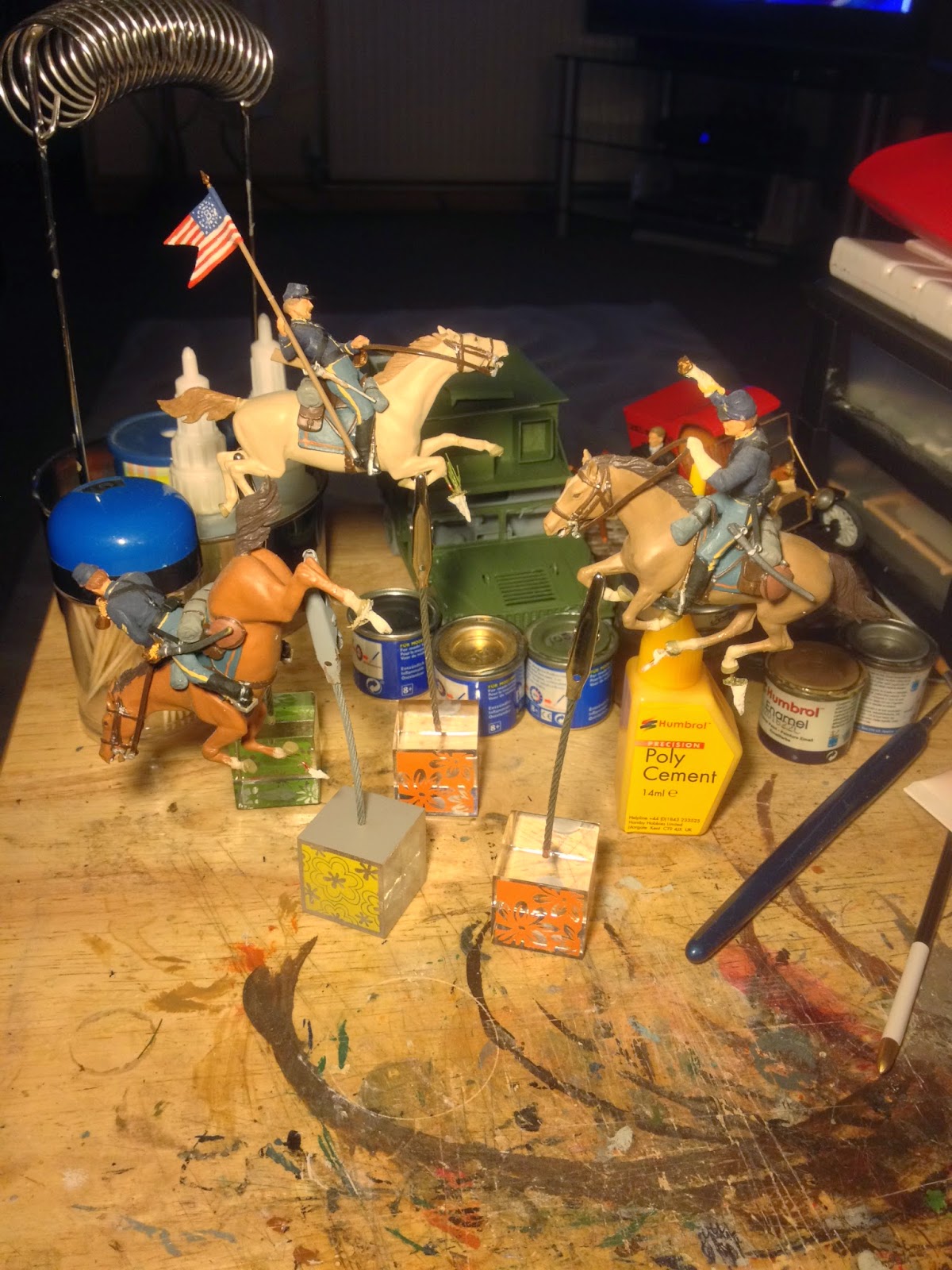 The re-work of this dio will be kept identical to the original concept as possible. Essentially I want to pack all six riders into a very small space to add as much movement to the piece as possible. This will include some of the horse's seemingly running off the base itself. The figures now repaired and the base coats of paint touched up where needed will be treated to high and low lights in oils with new sword blades added where necessary.

For each of the riders I have opted to enhance (as I do with all of my figures) them with oils to bring a little shade and light onto the pieces. I decided to start with the horses first as they are the bulk of each figure with plans to temporarily mount them onto a temporary base board to make my life easier when it comes to oil painting the riders.

The photos below show some of the riders in a half and fully complete condition following oils: 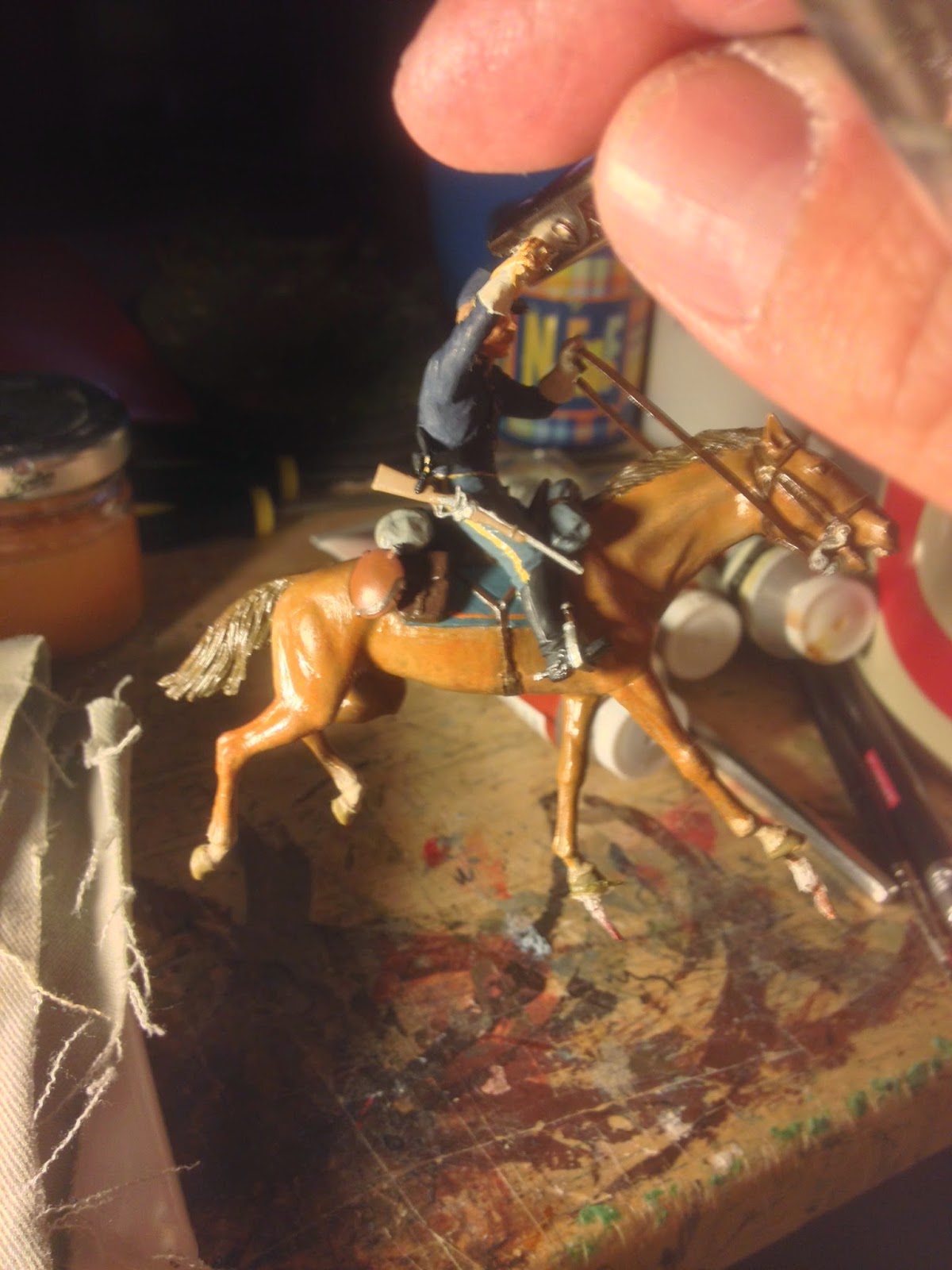 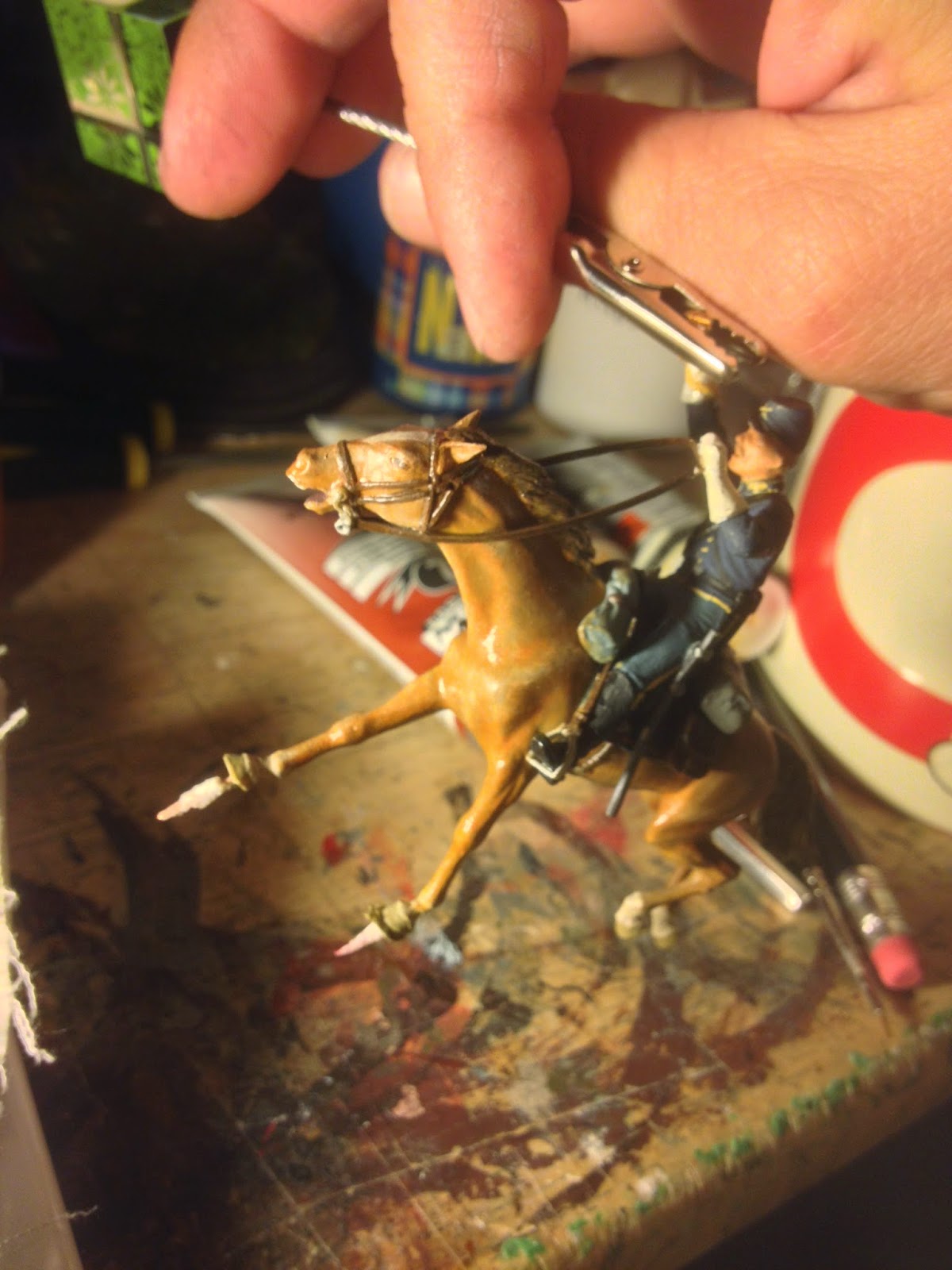 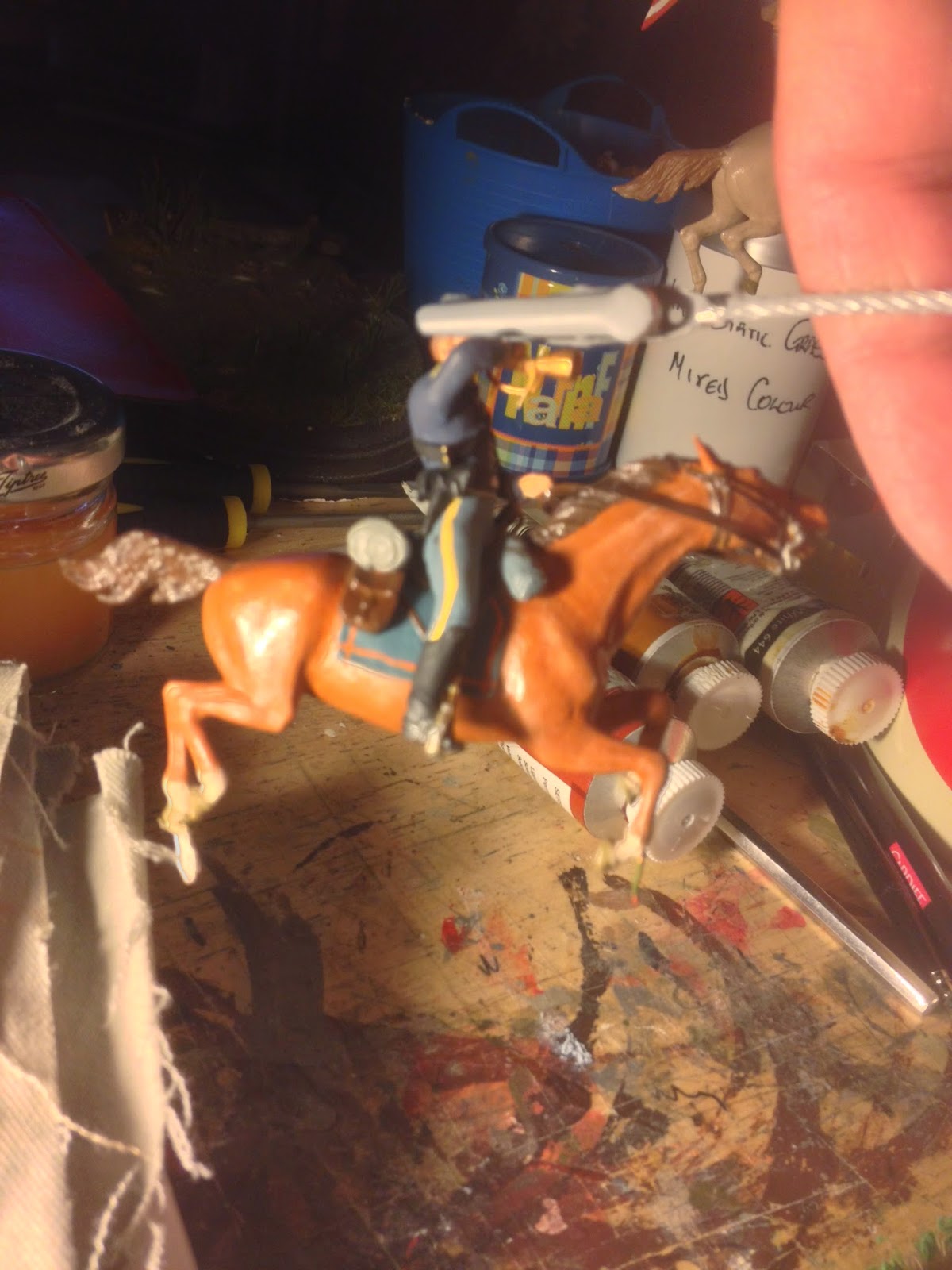 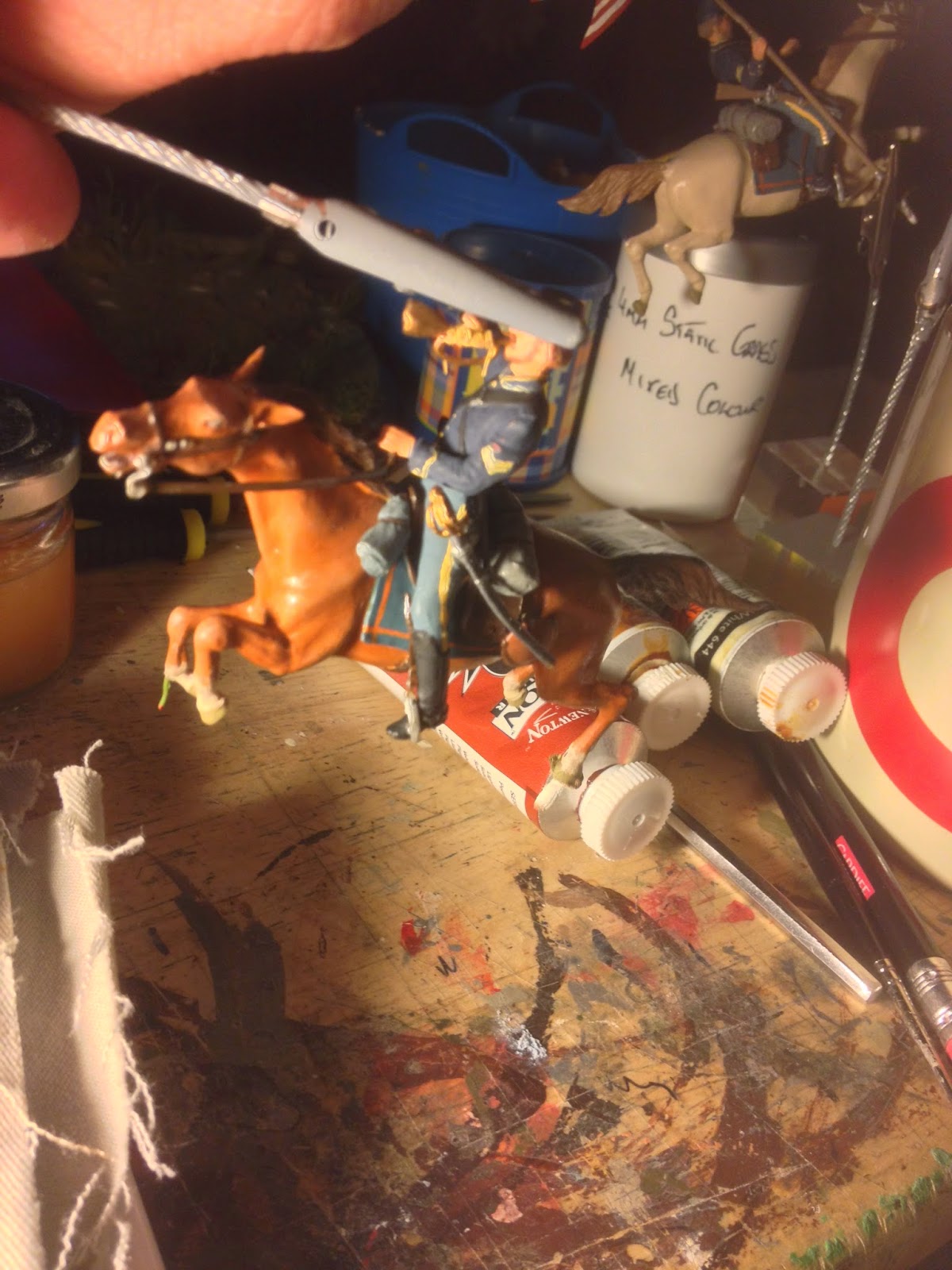 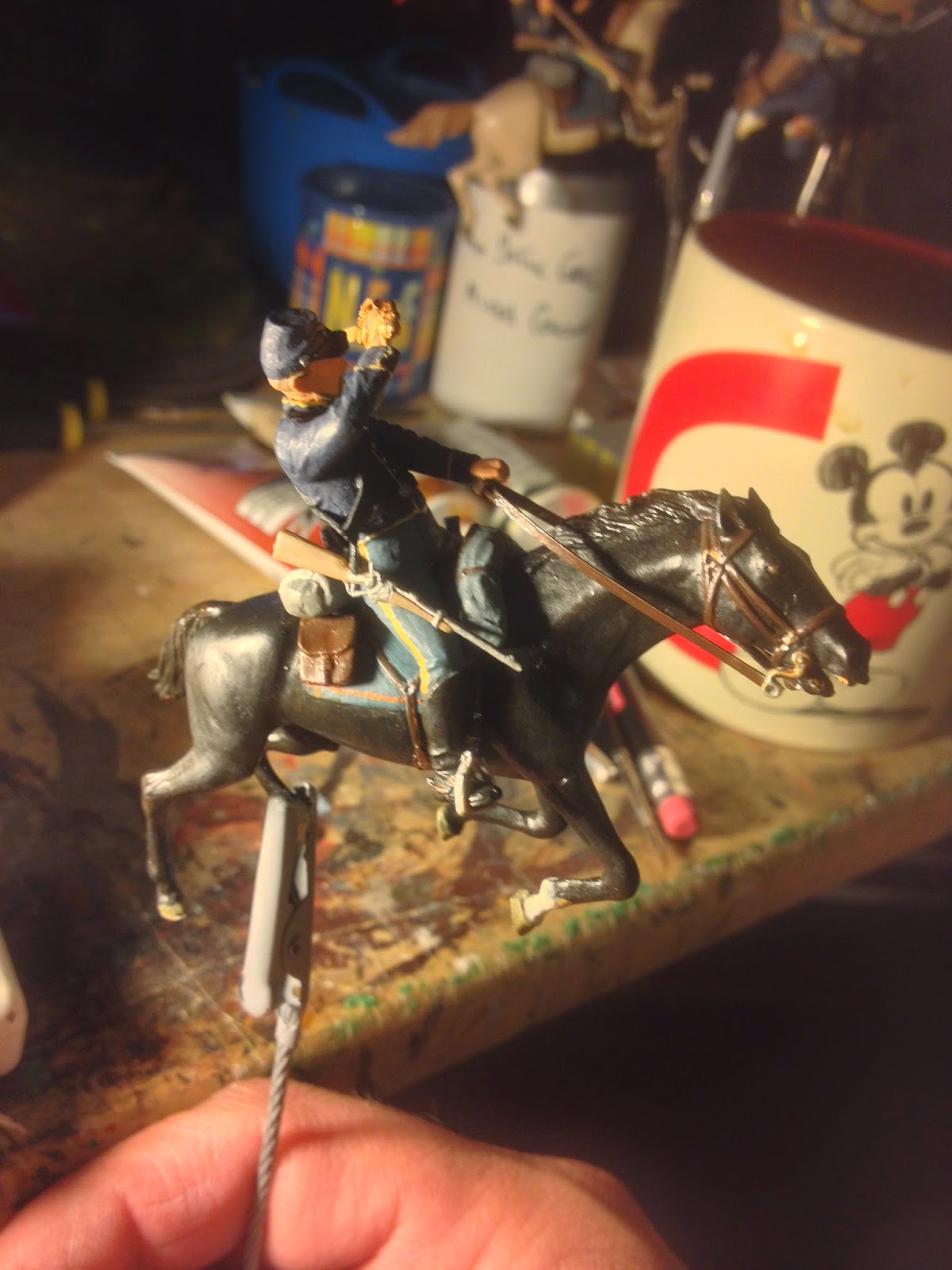 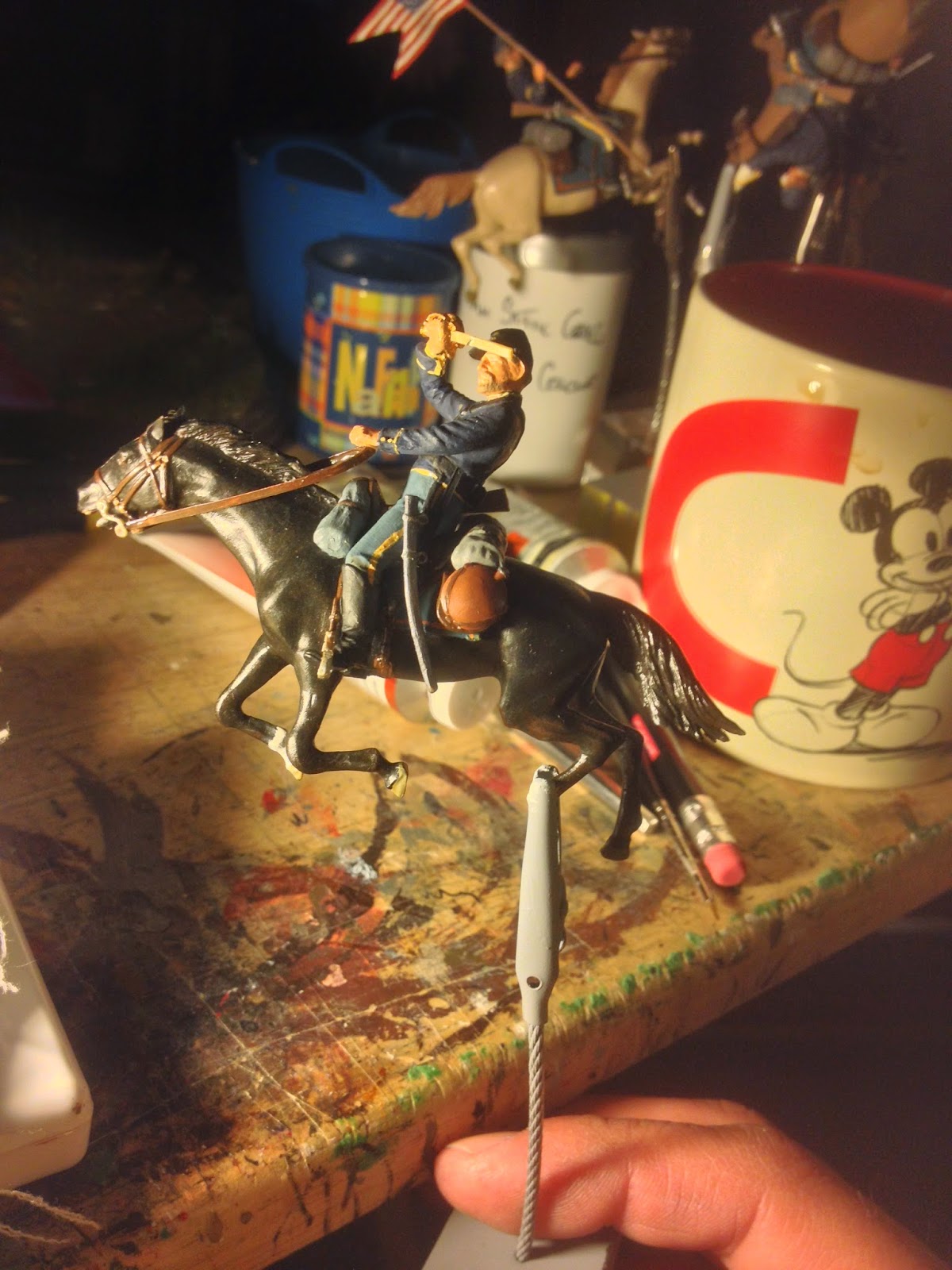 For the base it was simply a case of using the static grass applicator to cover the areas in small sections. Because this is a re-worked base I placed some temporary wires into the pre drilled mounting holes for the horses so that I could find them once the new grass had been applied: Photos of the base progress can be seen below: 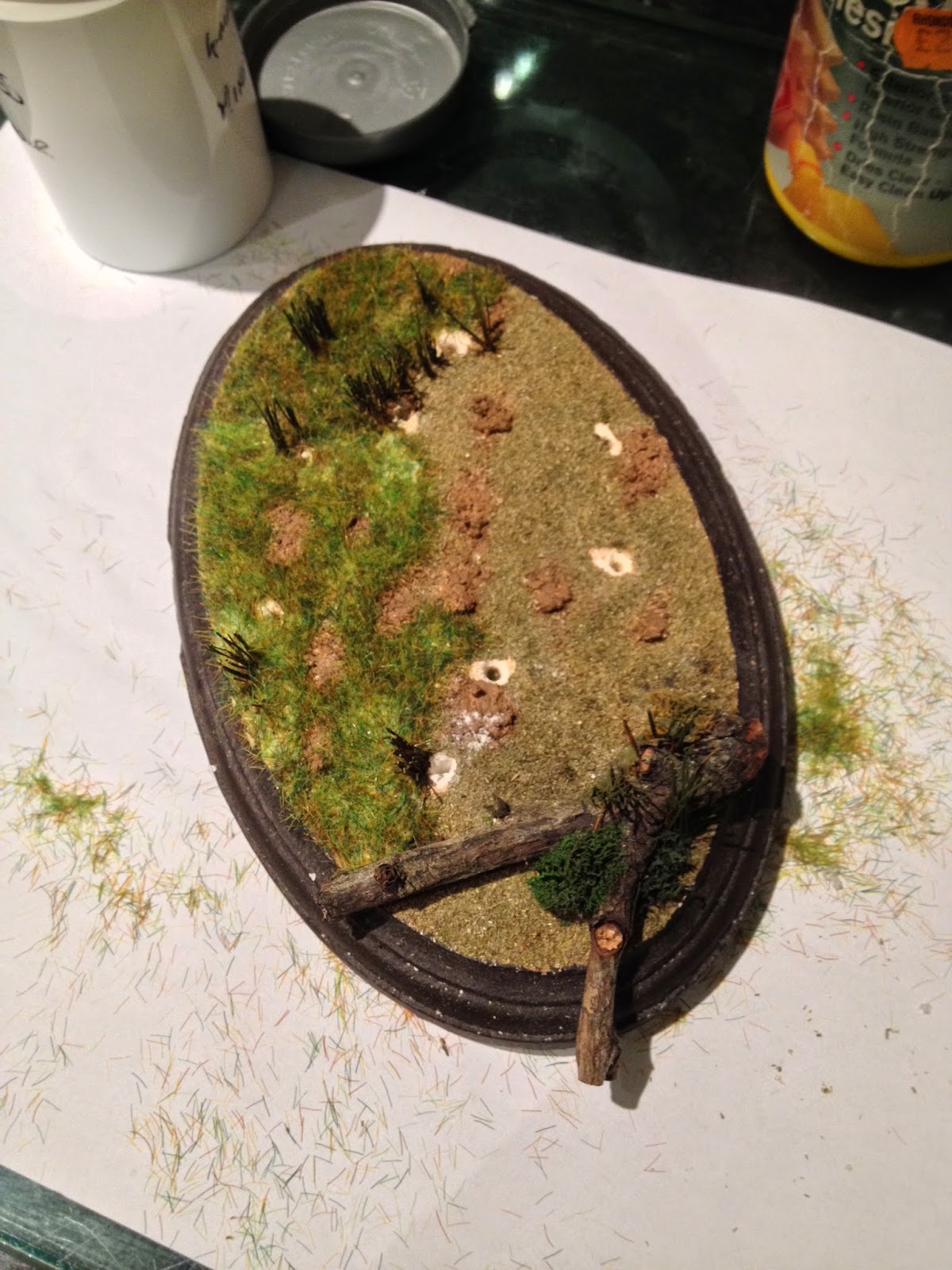 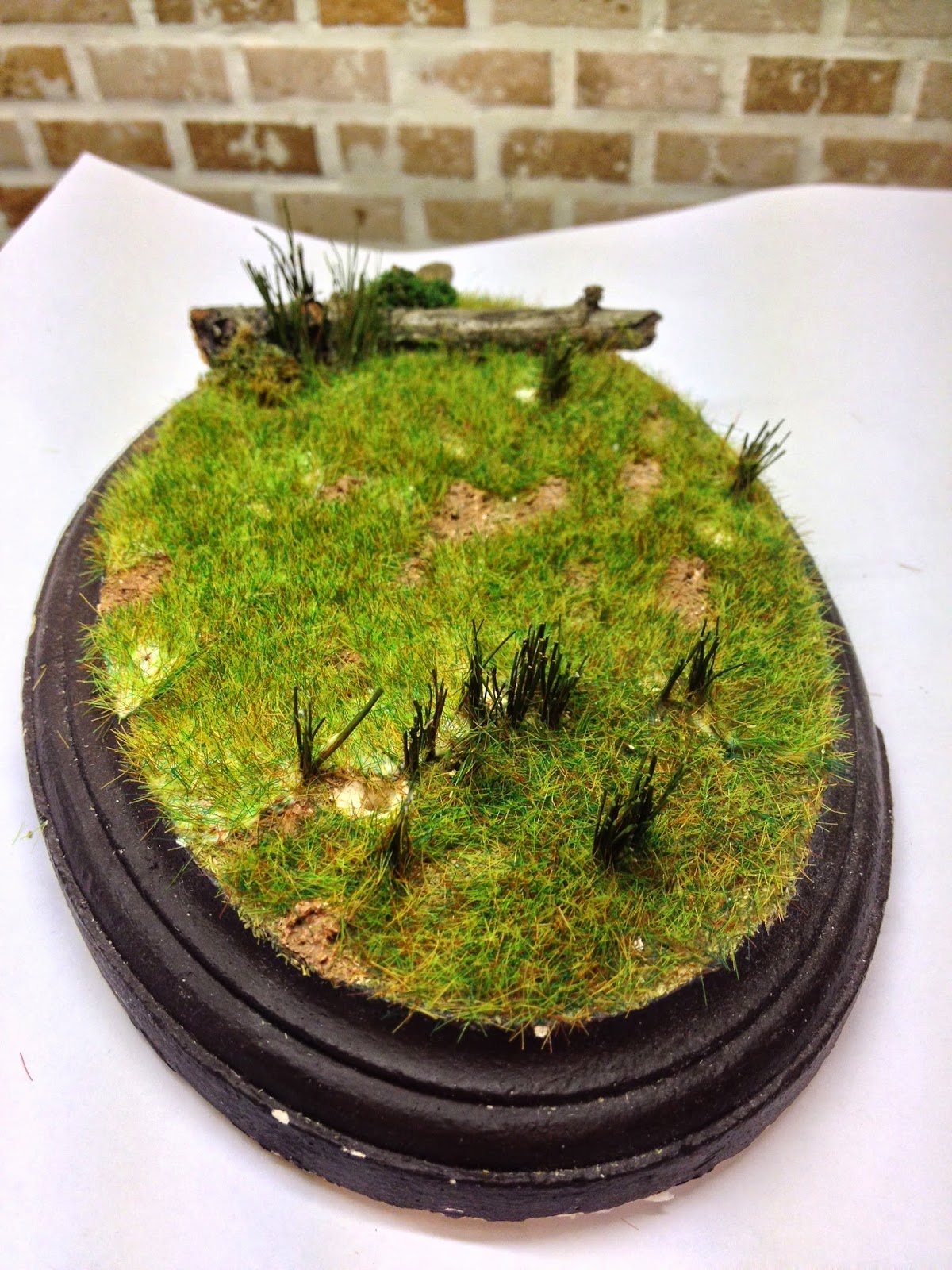 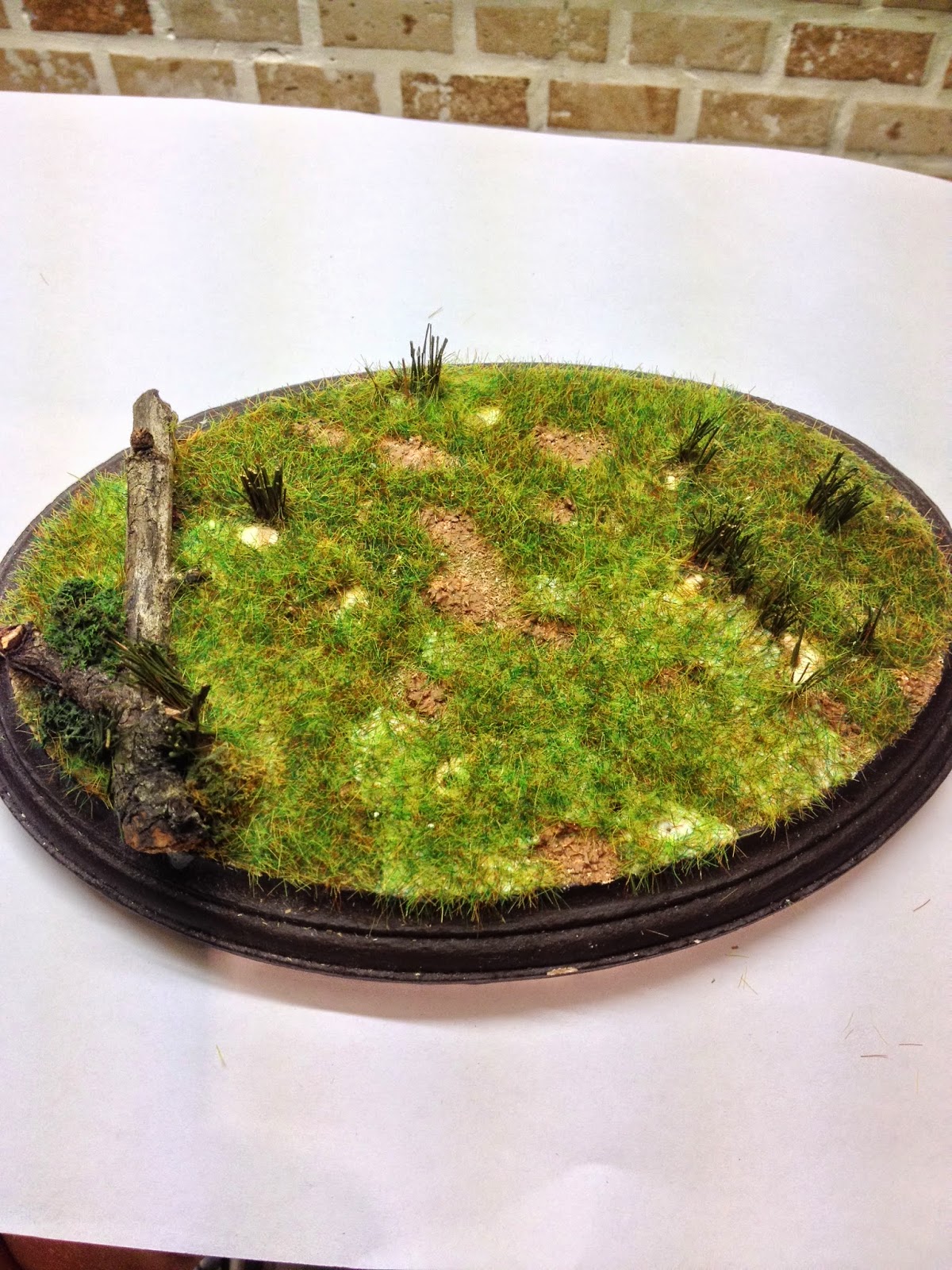 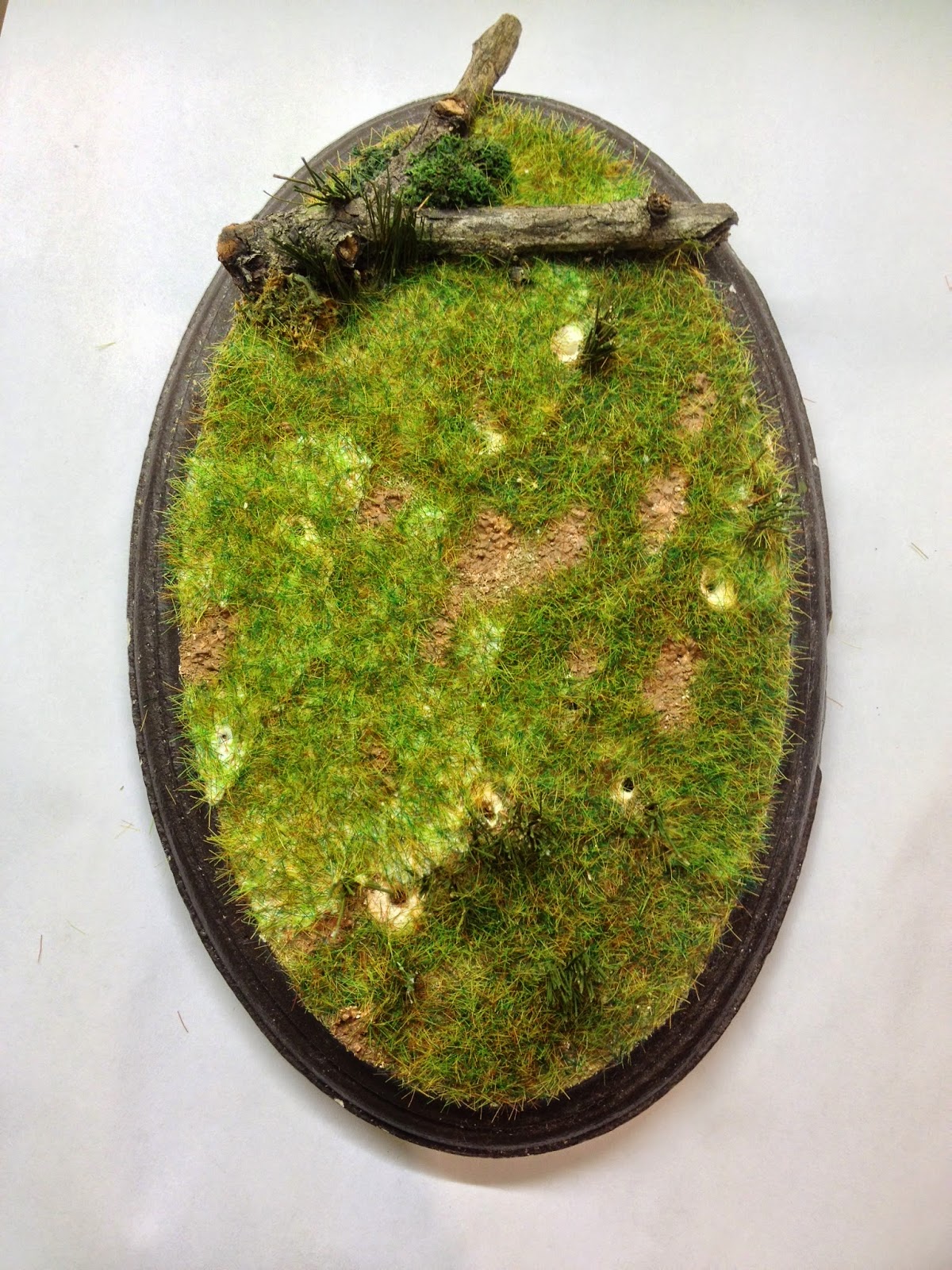 There isn't really a lot to add in terms of finishing touches for this dio as I had already planned out and completed this before I decided to re-work it. The finishing touches in this case are to simply secure each rider in his place and slowly build up the scene. Photos of progress as always are below: 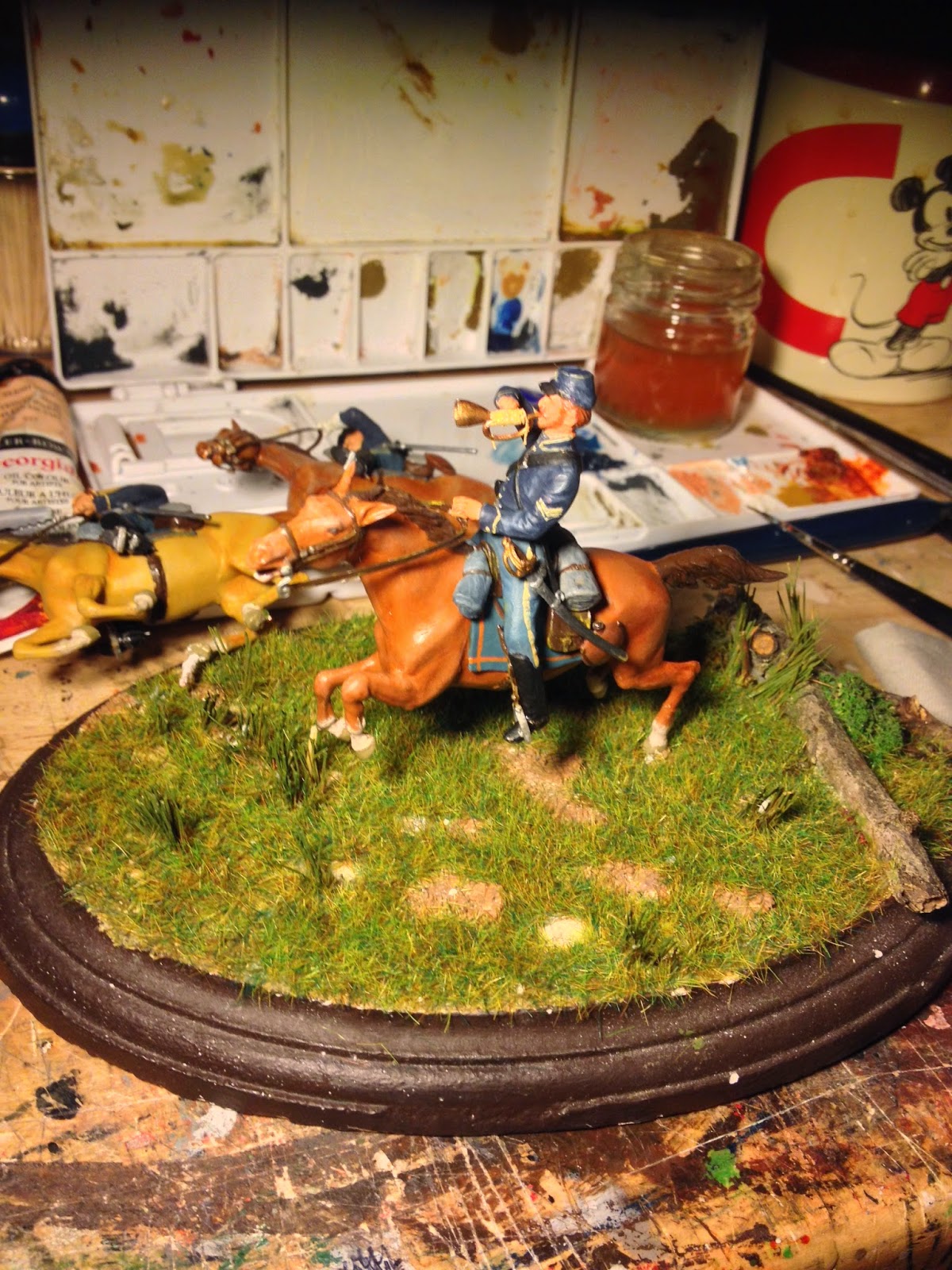 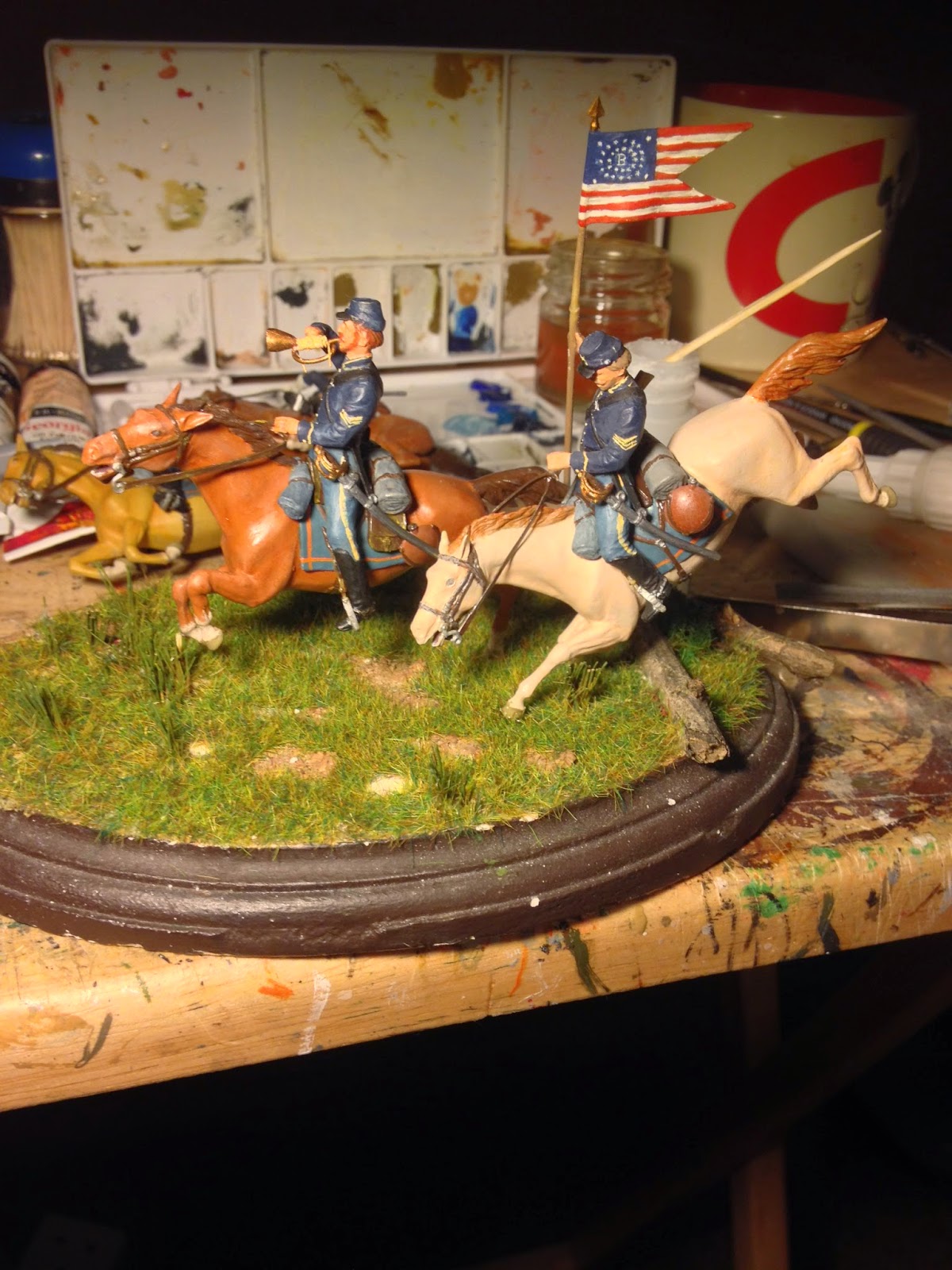 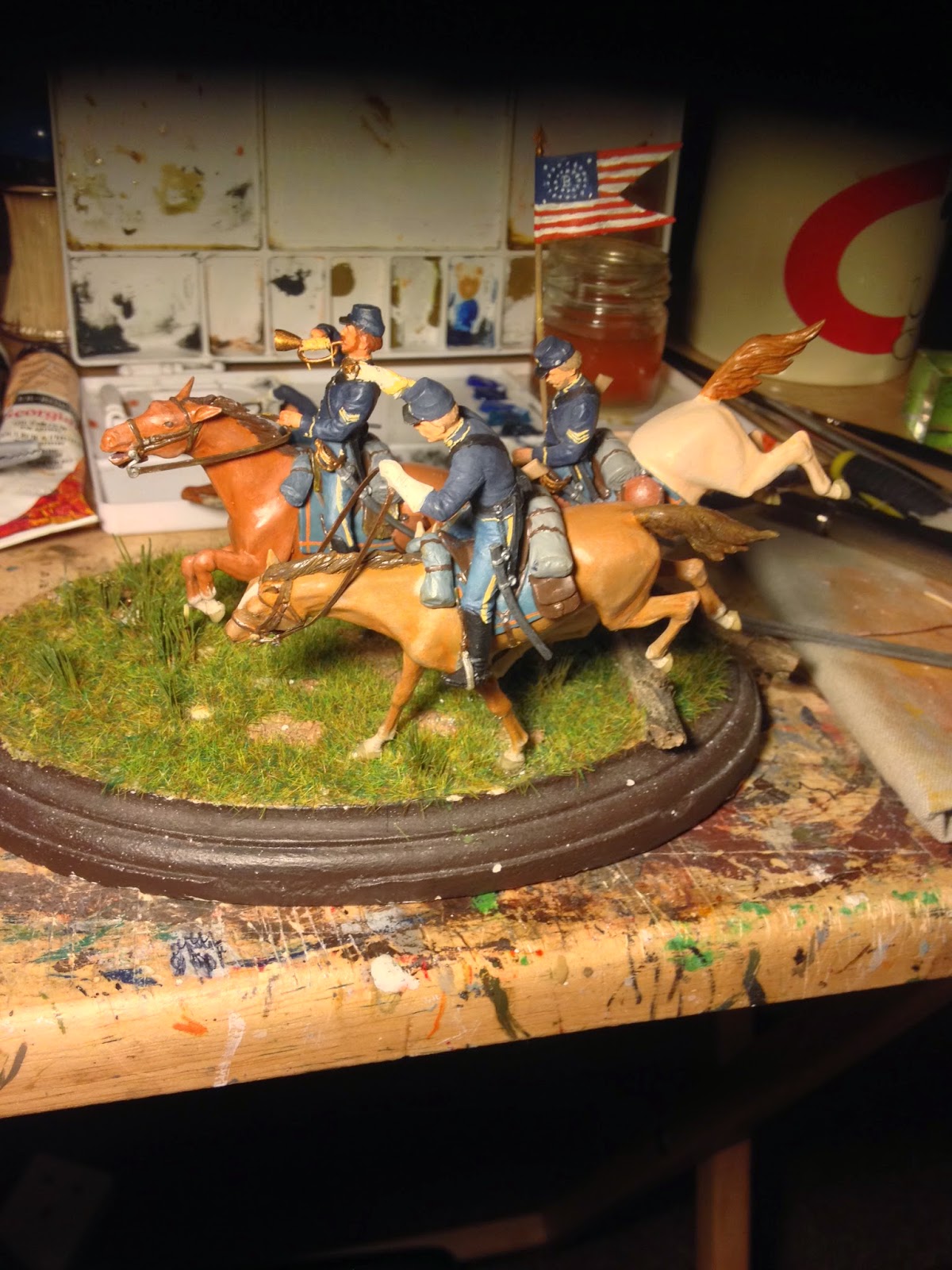 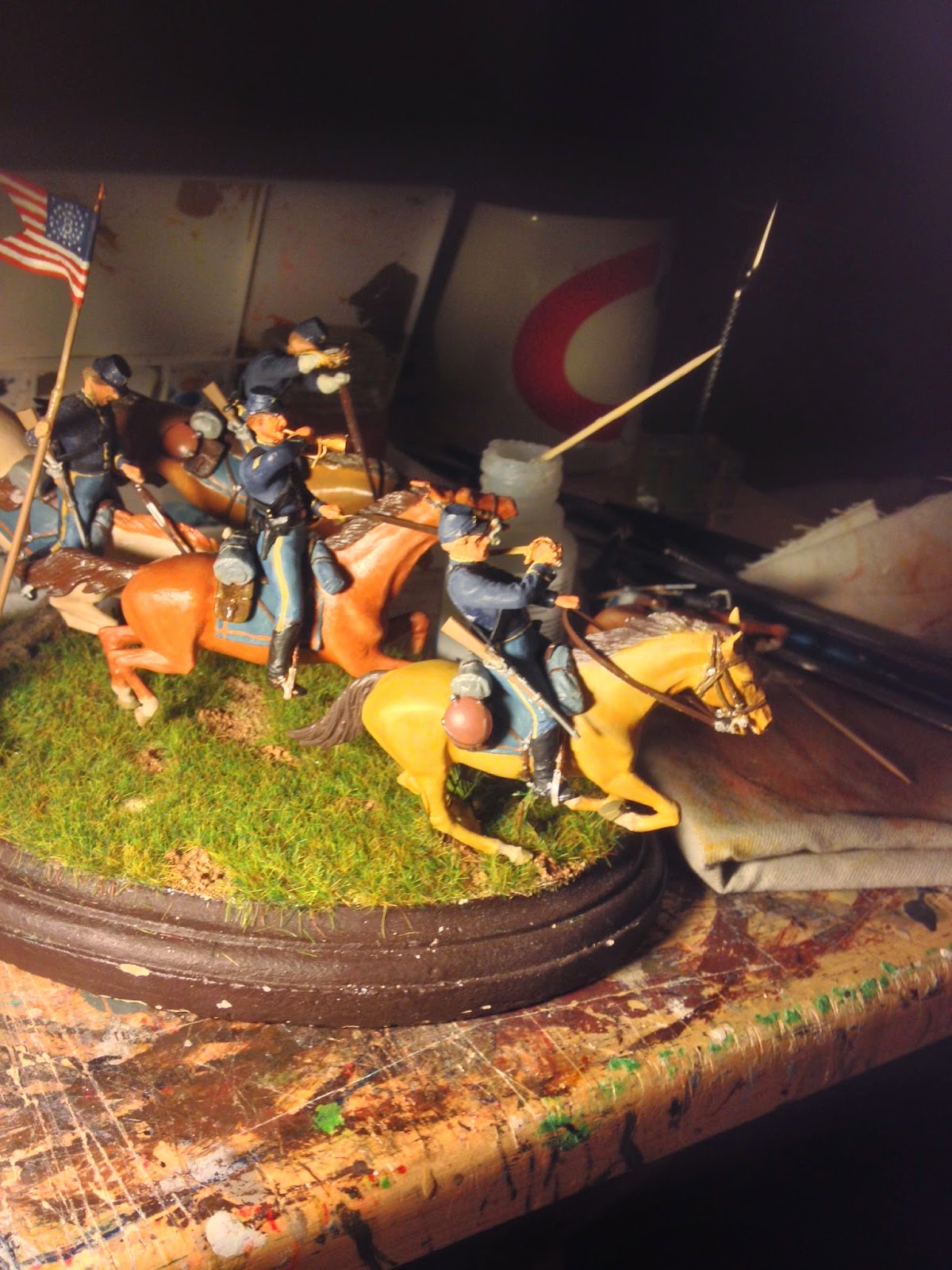 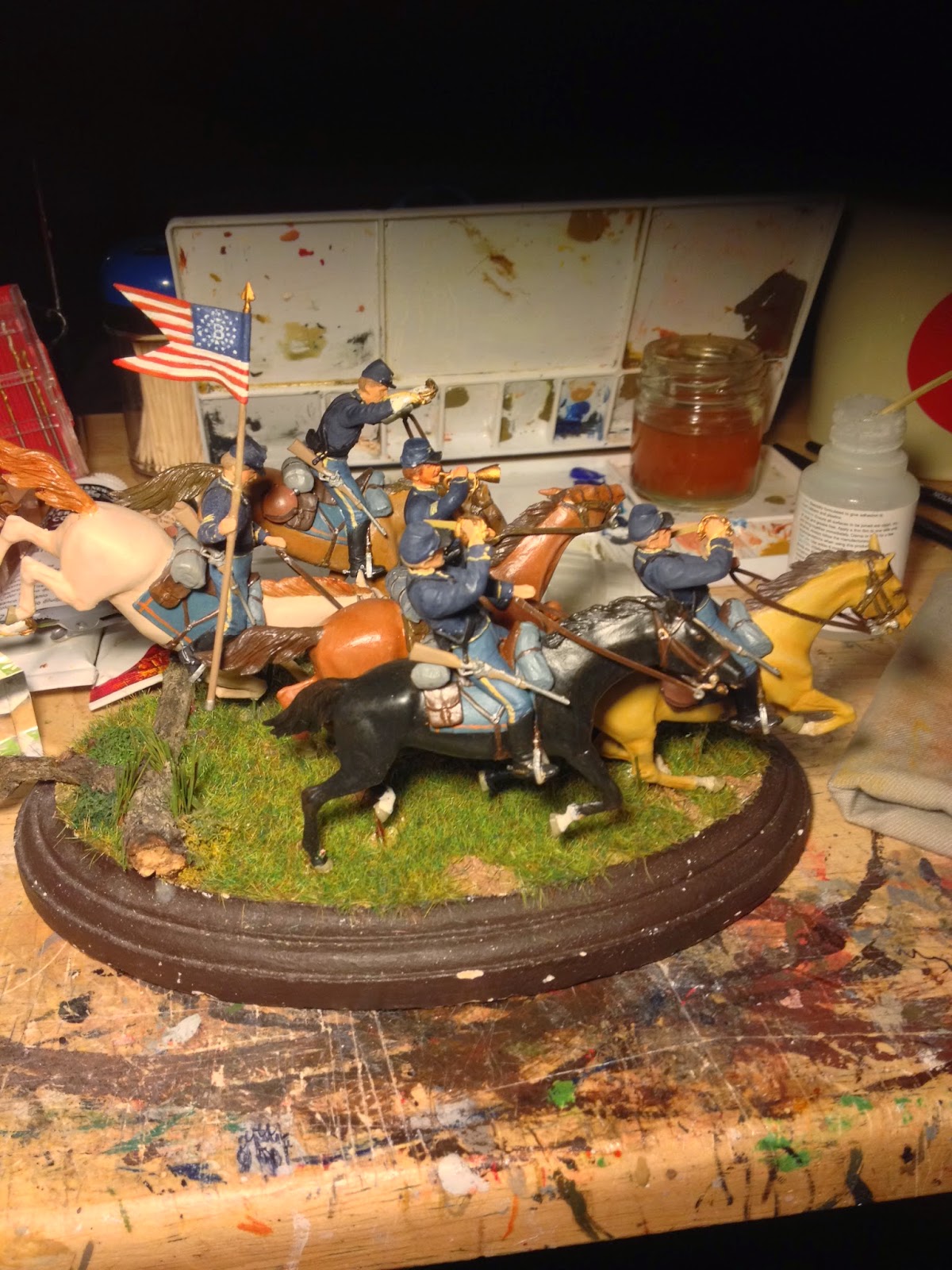 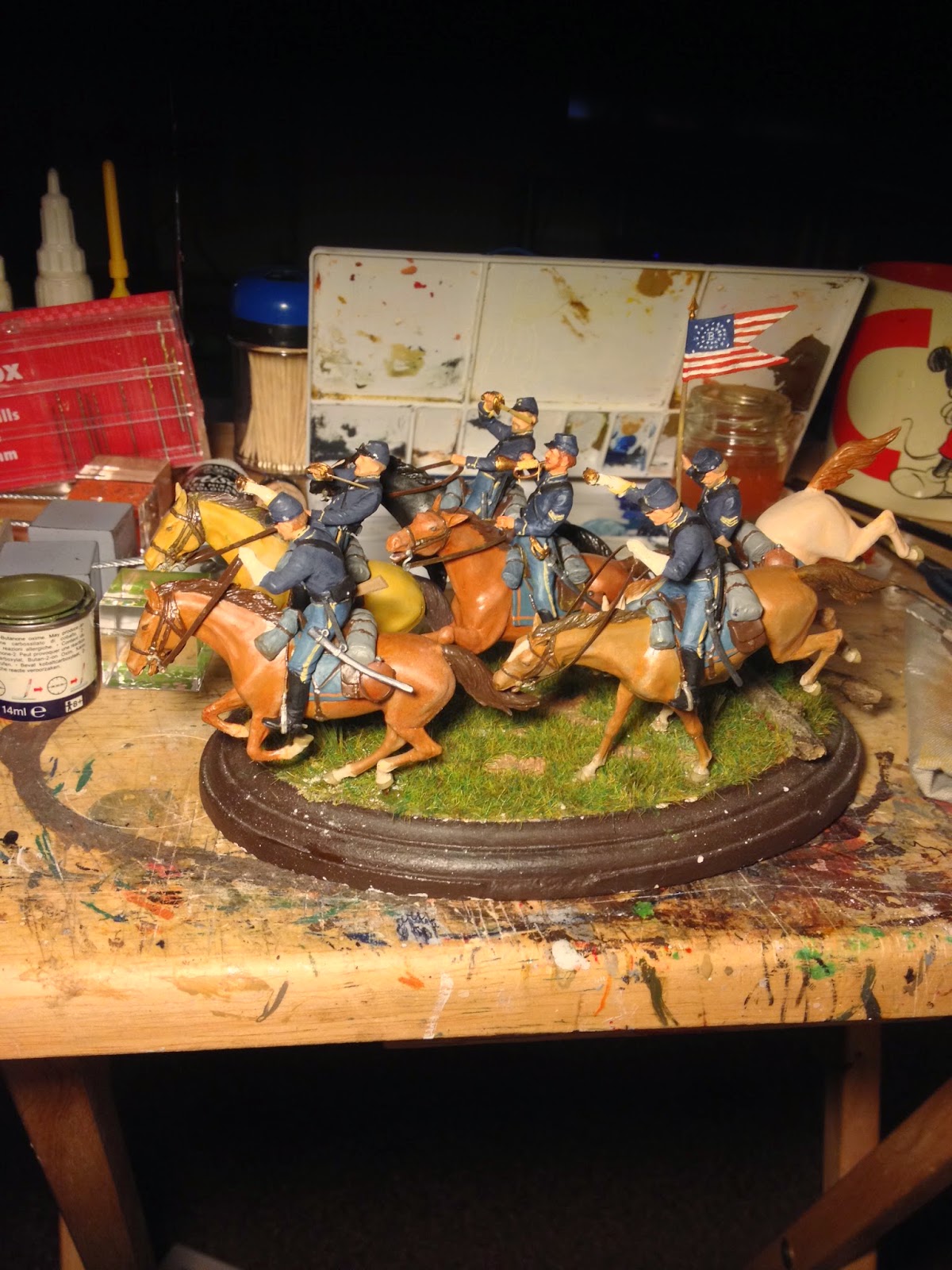 Once all the riders were secured into place I opted to recess the title plate that I secure to all of my models into the base. Following this, the base was then re-painted in acrylics as it has been a little chipped and battered in storage. Final touches include things like re-touching the bridles, etc in Humbrol silver, painting in the eyes of the horses and riders, ensuring that the mounting pins are disguised in more static grass, etc.

The kit from master box is fantastic. There is a detail kit to go with this and for the perfectionists among you I'm sure it will be a "must have" purchase. In all honesty the kit really doesn't need it. I have used two kits for this dio and couldn't find fault with either of them in terms of quality and detail. If you want to build something different from the usual 1/35 WWII military stuff then you can't go far wrong with this kit. I had a great time finishing it and I would love to here from you if you decide to take the plunge with it. Here is my finished diorama: 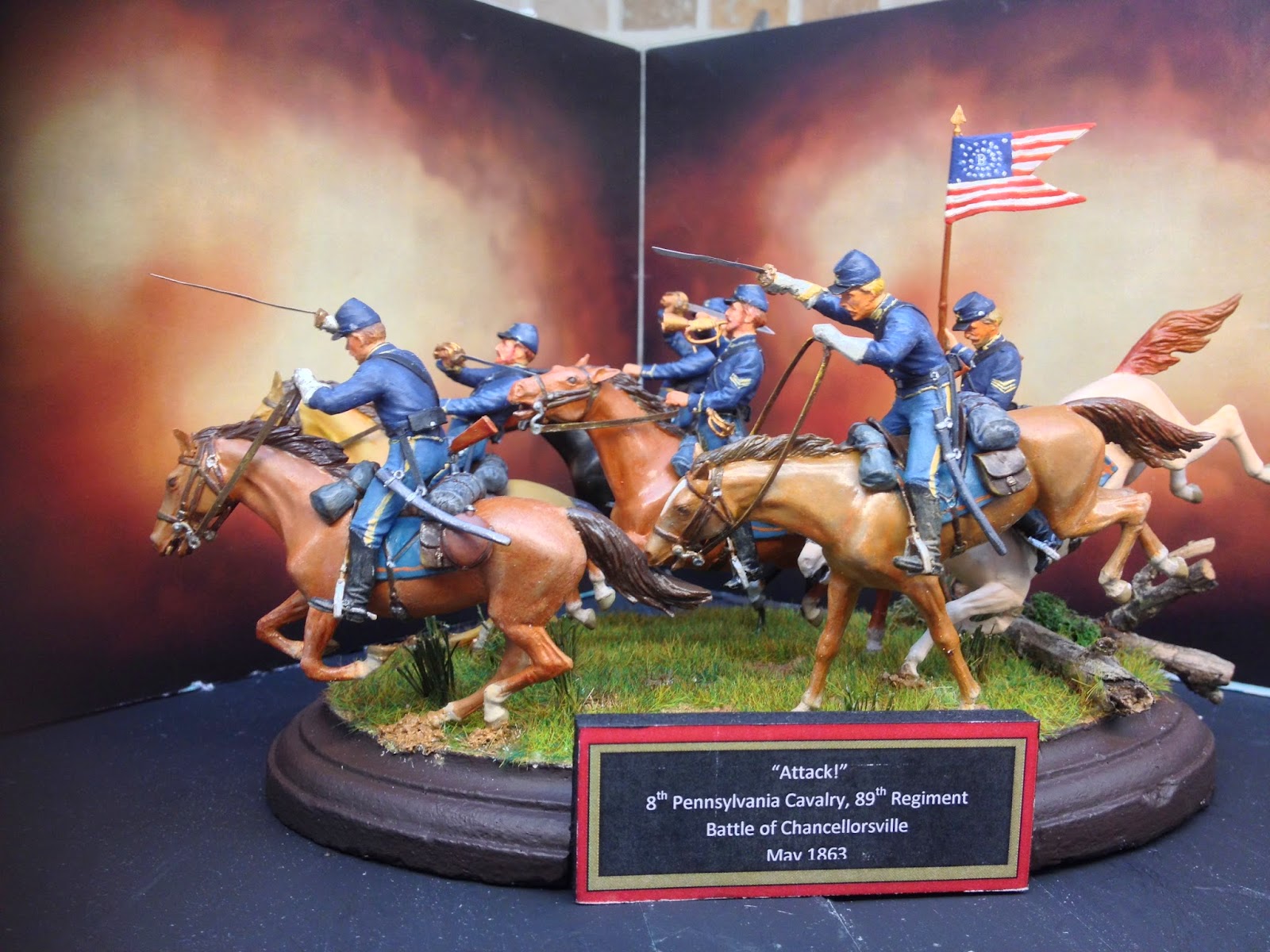 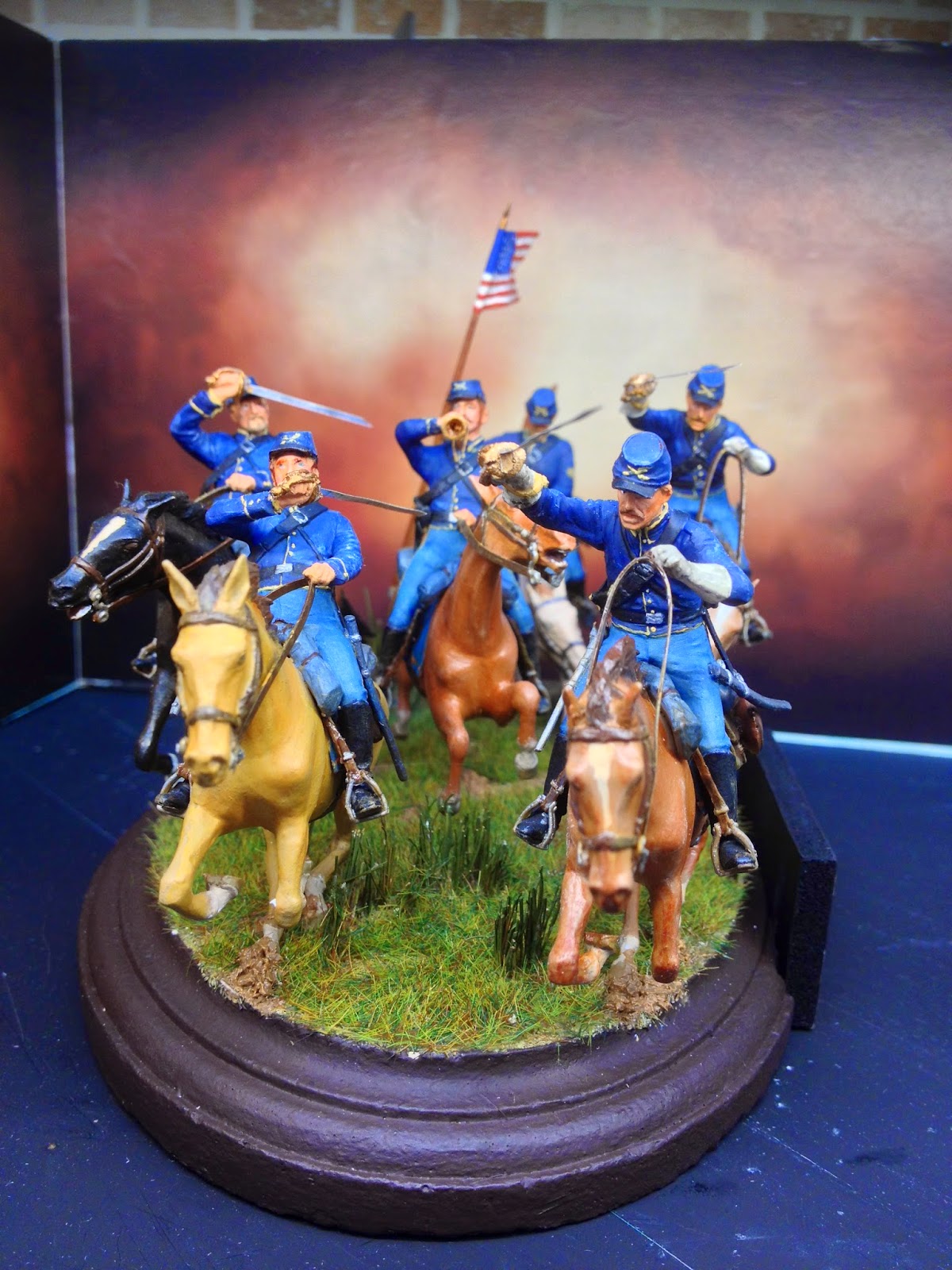 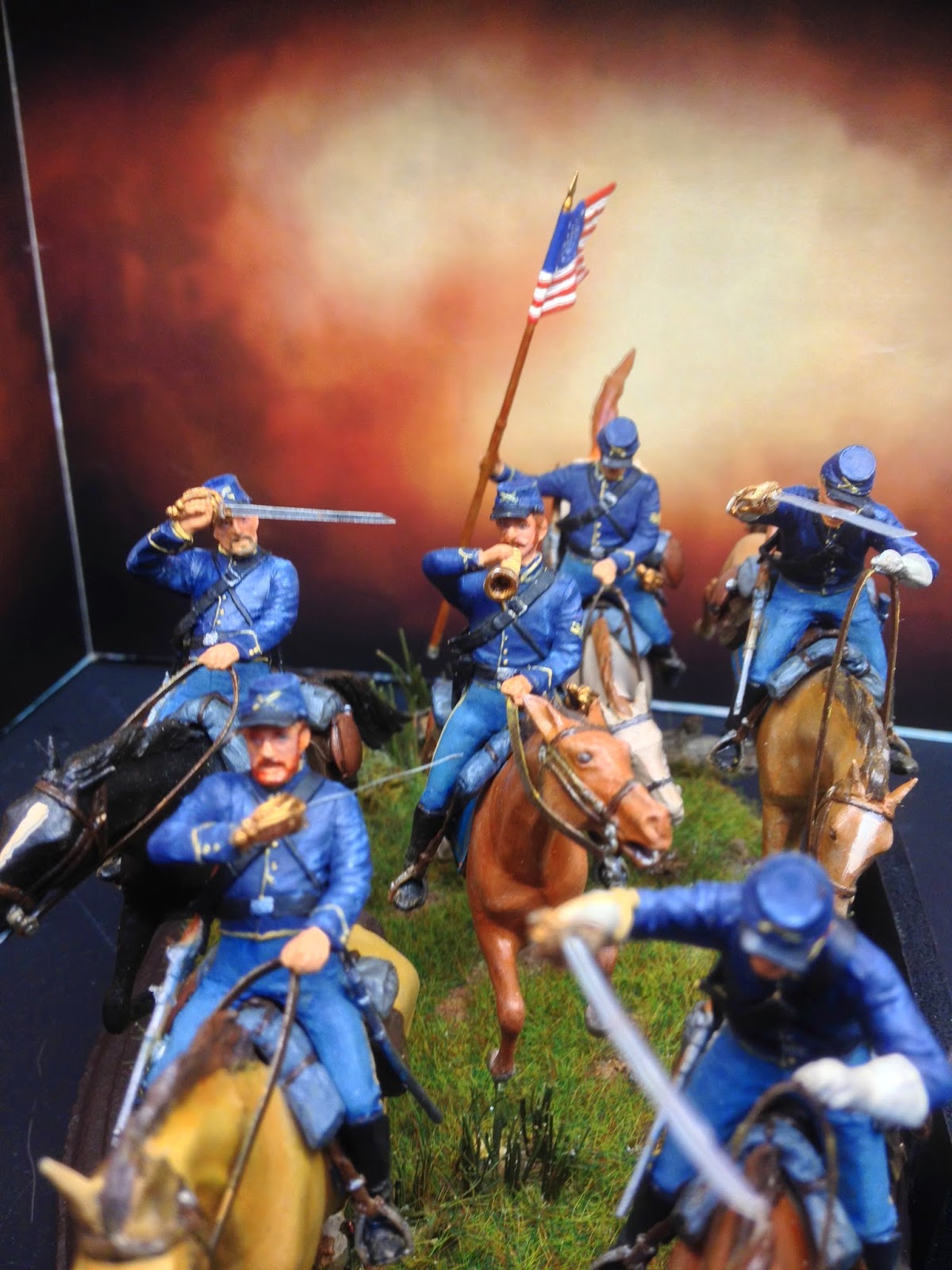 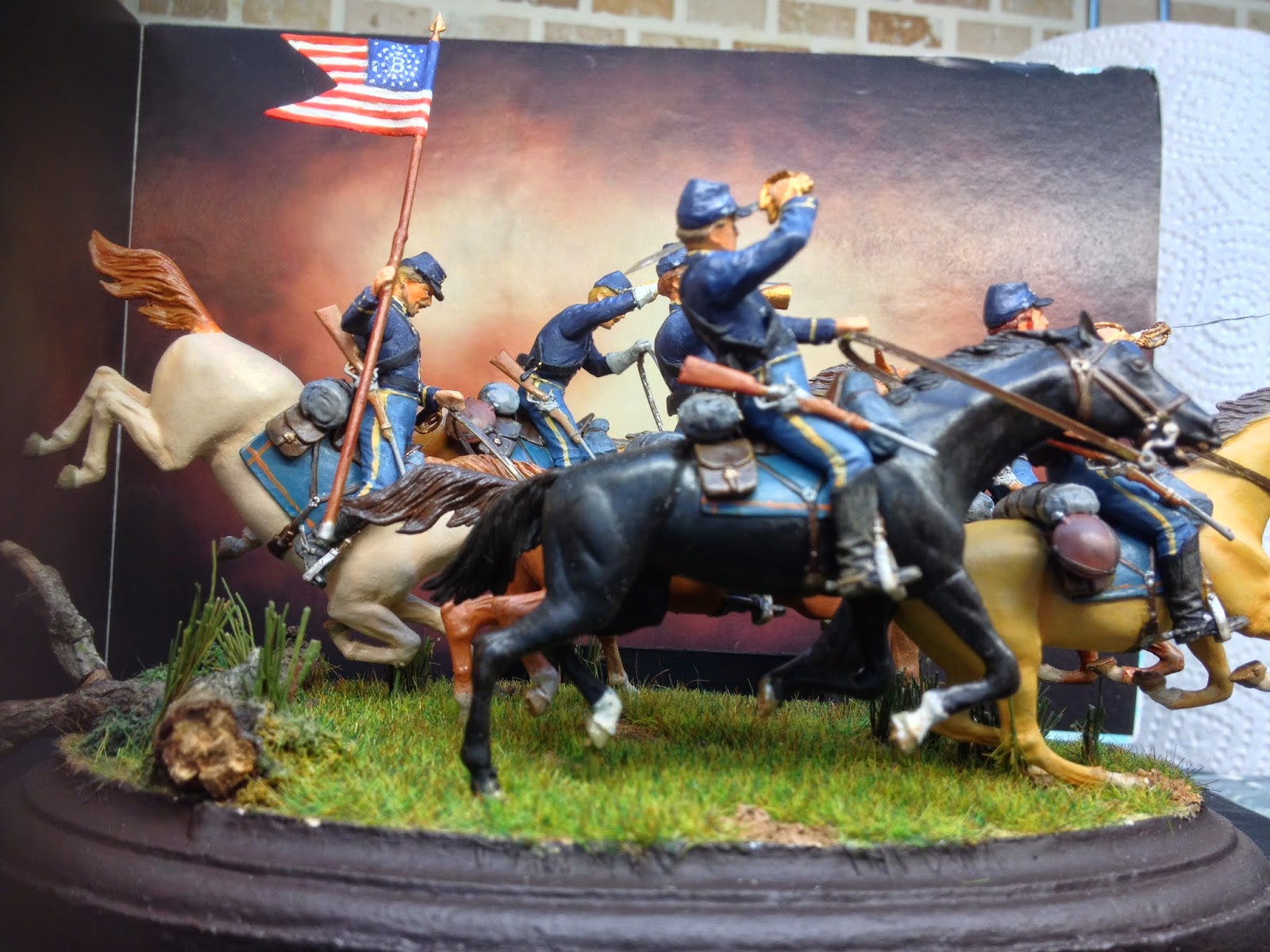 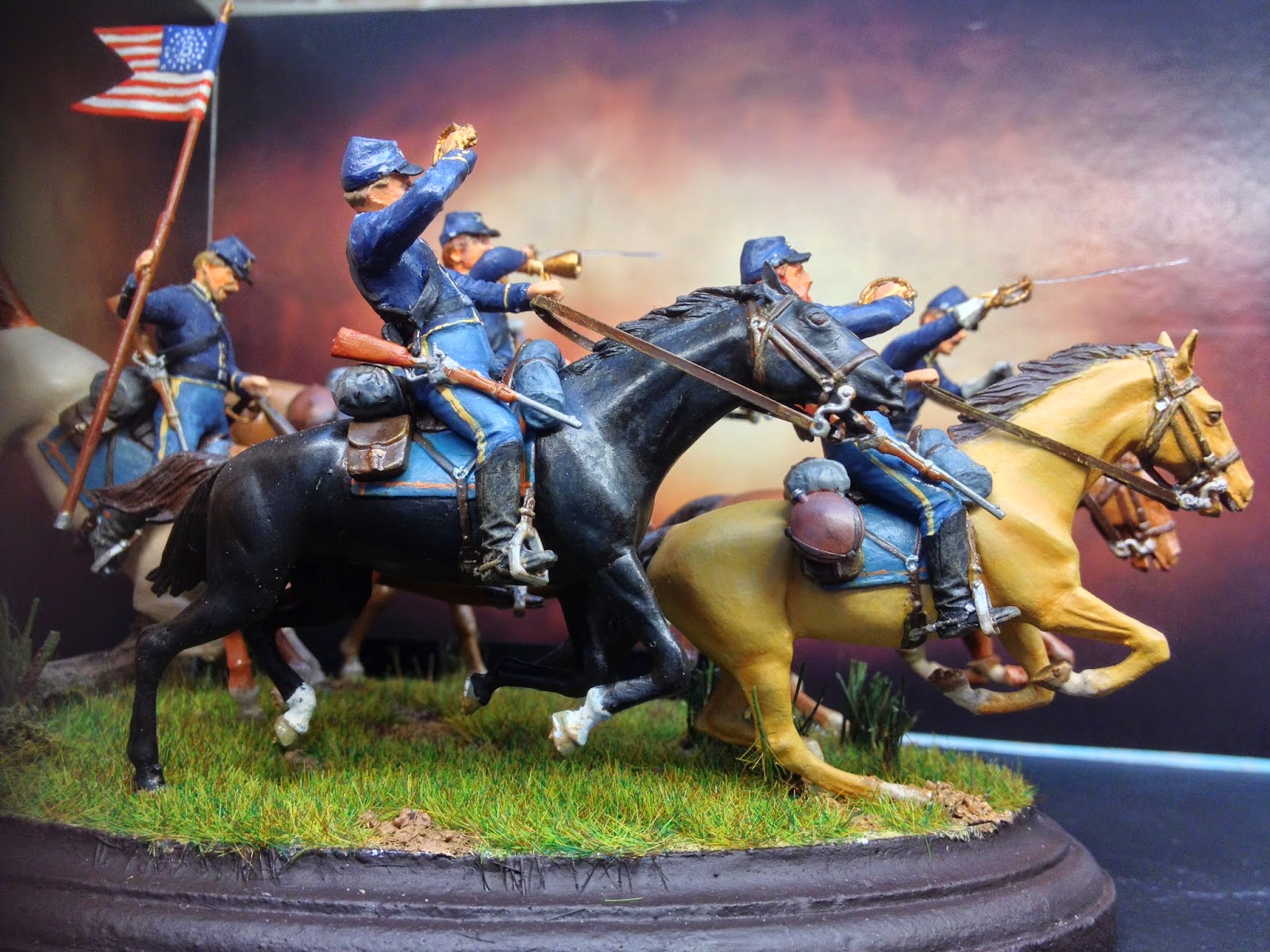 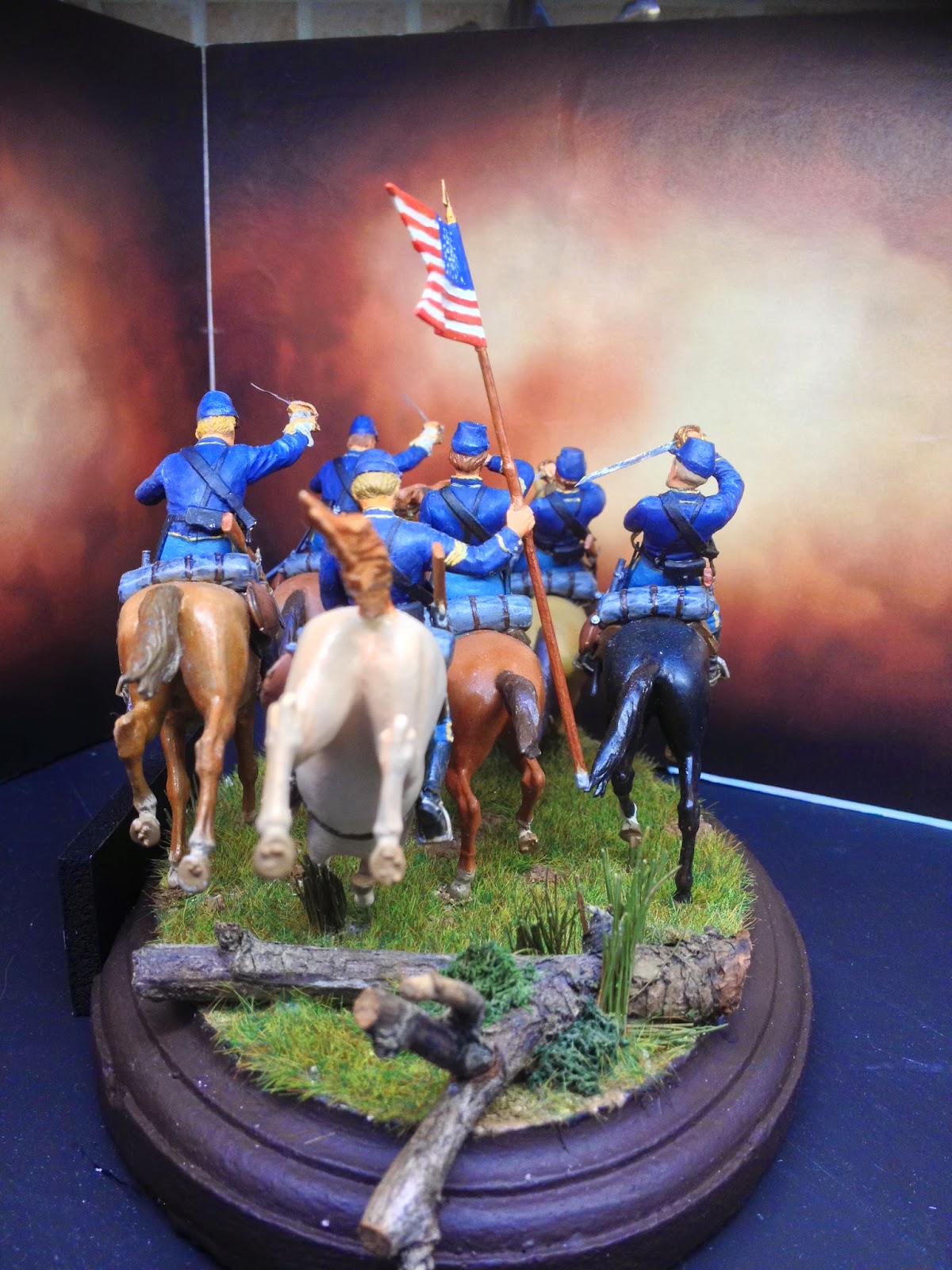 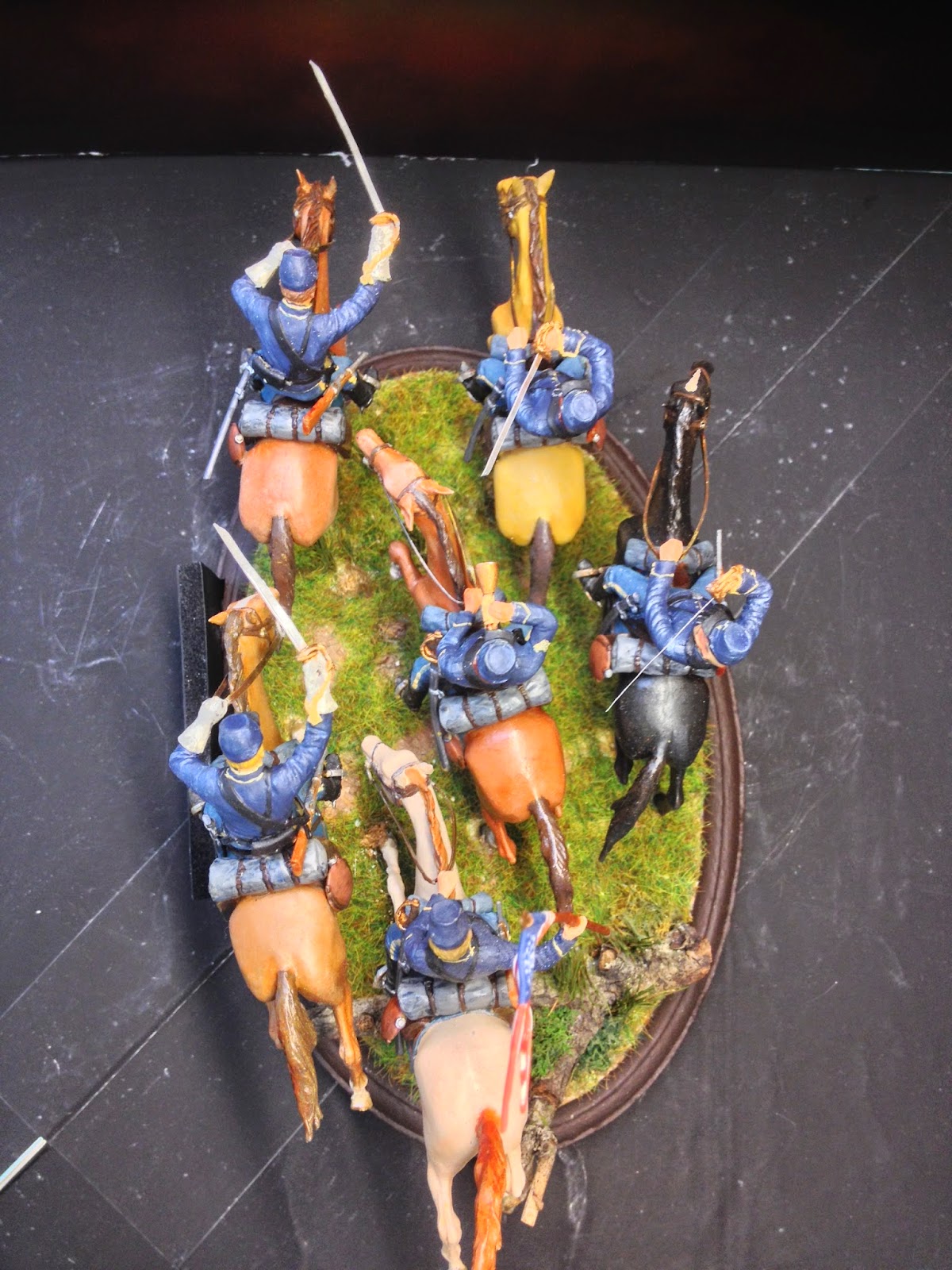