OK so this is my first blog and to be honest its a bit of an experiment. I thought I would start with a simple model to begin with for my blog, so here it is, a World War II RAF airman depicted sleeping it off between sorties on a sofa chair. Normally I sculpt my own figures now, but when I saw the simplicity and realism of this 120mm resin figure I just had to buy him. 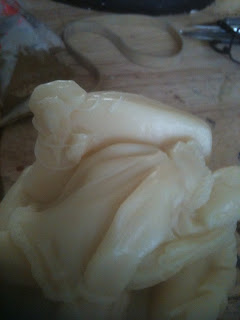 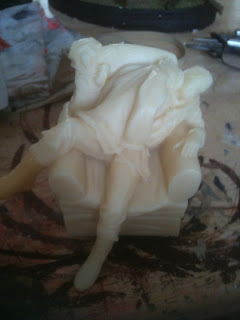 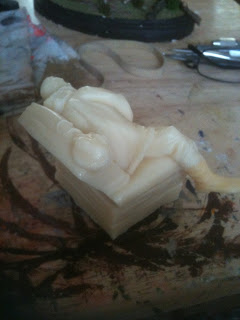 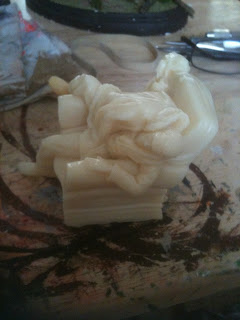 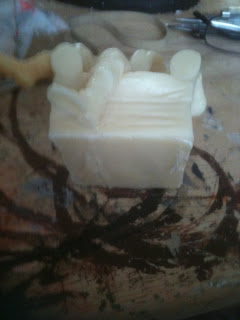 The first four photos are basically exactly as he is supplied. work done so far is simply cleaning up the un-attached foot and then pinning and cyno to the main figure. The next step for me is to Dremmel out the rather large base to make it easier for me to level this out when it comes to mounting the figure on the base that I choose. The next photo is the base as supplied which I intend to carve out

The next stages for me were to give the pilot a quick spray of my trusty rattle can of grey car primer. Not only doe this give a good base for painting later on but it tends to show up any imperfections, and boy there were a few !!  A large amount of Squadron Green putty and a small amount of Miliput putty later and I was a little happier with the figure. In addition I removed some of the moulded in electrical wires for the pilits mask and replaced with different gauges of copper wire. I also added an officers rank band around the pilots exposed arm by using some lead foil and very fine gauge wire. I used the same wire for the front of the arms of the chair to represent the heavy seams that you would usually expect to see on a chair from this era. 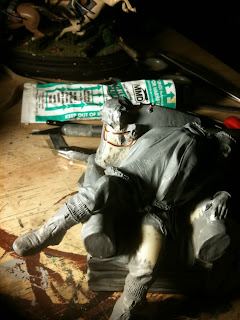 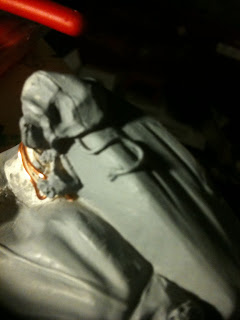 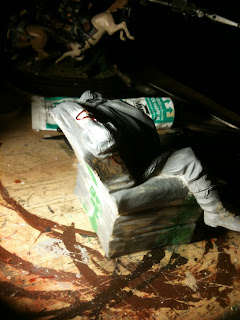 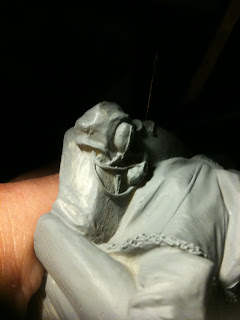 Some drying time and sanding later I then began the process of "block" Colouring the figue with Humbrol Enamels. this figure is unusual as normally these come supplied in a number of parts that can be individually painted before assembly, but as a one piece casting I think that applying flat colours quickly will allow me to see what detail is there and what is going to need extra work later down the line. The one thing that I have noticed is the poor cast and lack of detail on the pilot boot that is hanging over the arm of the chair. Some research is definitely needed to identify a tread pattern which will have to be added later. 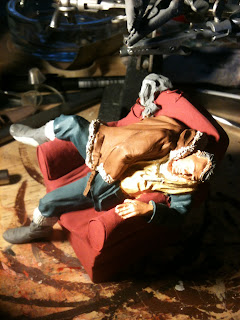 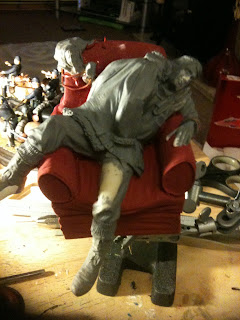 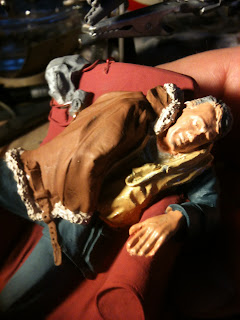 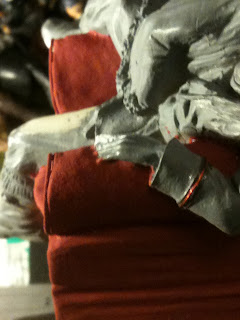 While I waited for the enamels to dry, I began to think about the base and setting for this figure. I decided that a little research was in order so after watching (for about the hundreth time) The film the Battle of Britain I was left with two choices 1) place the chair outside on the grass being as the Battle of Britain was fought in the height of summer and pilots would drag any furniture they could out into the sun or 2) place him inside one of the many run down shacks of small flying clubs that the RAF utilised when the Luftwaffe destroyed the RAF's main airfields. I decided on the second option. I also opted to use a larger than normal base for this figure as from past experience dealing with RAF pilots, they will use any excuse to have a cup of tea and read the paper no matter what else is going on at the time. With the scene set in my mind I then set about creating this on the base. First order of business was to scratch build a simple formica table that was quite popular in the mid 40's for his cuppa and paper to rest on. This was constructed out of two sheets of Balsa wood glued together and four cocktail sticks for the legs A sliver of plastic card was then wrapped around the table to represent the typical rubber surround often seen on this type of furniture. 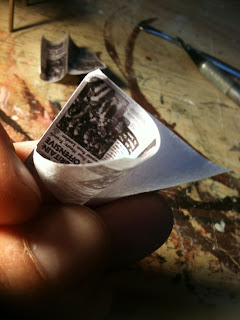 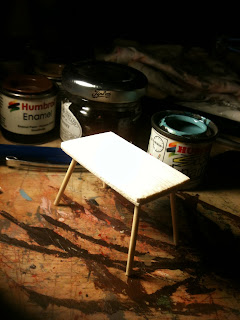 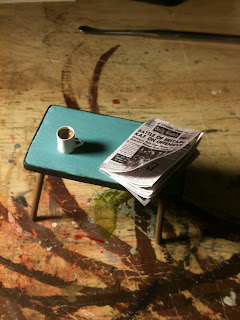 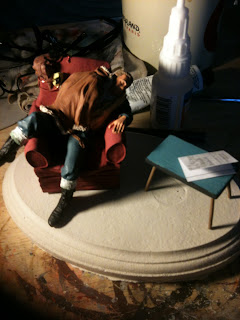 For the newspaper I simply typed in WWII Battle of Britain into google images, saved the image, scaled it down and printed a few copies of it. Once printed I then split the paper to create a scale effect of thinner paper (not easy as I found out). The cup of tea was a drinks straw and a piece of thin wire for the handle. everythine was painted and I was quite happy with the final result.

Next order of business was the wooden floor of the hut that the pilot would be sleeping in. A short measure of my house floorboards and a division by 16 to give the right scale and more Balsa wood was cut into strips to represent these boards. To get the right colour a small amount of very strong black coffee was used to stain the boards and after a short while of drying they were then cut and glued sepperately onto to the base with white glue. once the glue had dried the gaps between the boards was washed with diluted burnt sienna oil paints and then the floor was painted in gloss varnish to complete the effect. I should also mention that after some research I found out that RAF pilot boots of that era were in fact smooth bottomed leather and contained no tread pattern saving me some additional scratch details. 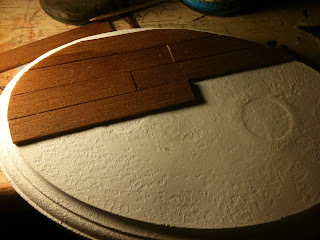 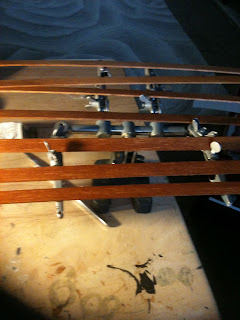 Time for oils
With the block colours now complete for the airman I decided to start the oil shading and light on the chair first. Cadmium Red, Burnt Sienna and a touch of Lamp Black was mixed in various shades to create the desired effect of a very well used and comfortable chair that invited my airman to slip into a peaceful slumber and ignore the headlines in the newspaper and his steaming hot cup of tea: 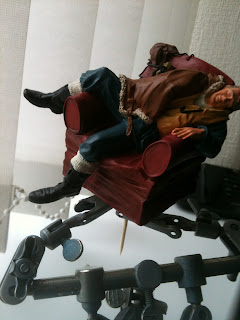 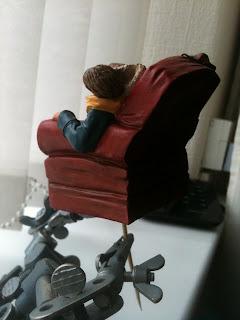 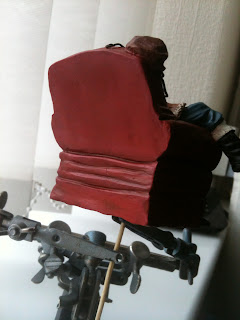 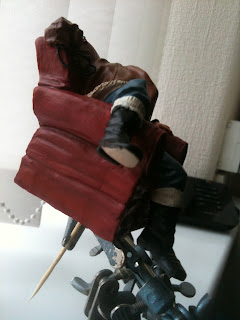 With the chair complete I then turned my attention to first the Irvin Flying Jacket which was given an over-all coat of burnt sienna with signal yellow used to highlight some very worn seams. white was then used to highlight the folds in the leather and then the whole jacket was blended together to give the effect of a worn and comfortable leather jacket. For the wool surrounds some very light grey was washed over the cream enamel base followed by a light wash of burnt sienna. The wool edges were then wiped with a cloth leaving light cream tops and the wash colours in the crevices of the wool. 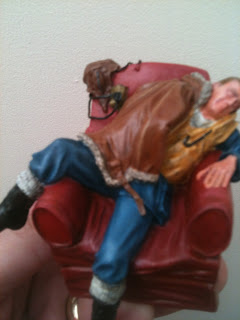 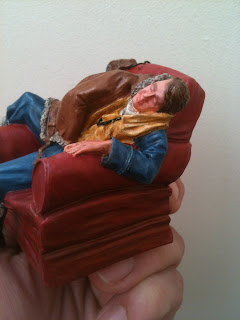 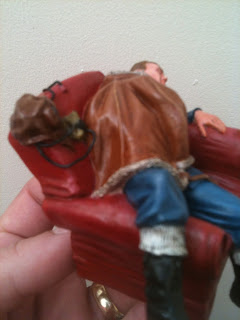 For the uniform I gave it an overall coat of Prussian blue oil and then mixed some of the blue with a very small amount of lamp black followed by a small amount of white with another batch of prussian blue for the highlights. The Mae West life Jacket was coated in signal yellow with white again used for the highlights and once it was dry a small amount of drybrushed lamp black was used to emulate the dirt and oil that seemed to be picked up by the vests almost as soon as they were put on by the pilots. I did consider painting the pilots face with a little stubble, however after being raised by an ex WWII RAF officer I rejected that idea as no self respecting officer of that era would allow himself to be seen unshaven no matter how tired and battle weary he was.
The Base
For the completion of the base I decided to keep it very simple. The wooden stained planks were varnished and I decided to use a small RAF pin badge that I had aquired many years ago when I worked for the RAF. This was mounted on the floor in front of the pilot in case an observer of the model did not realise that this was a WWII RAF pilot ! The table with the now completed news paper and cup of tea was mounted onto the floor and the pilot settled onto his final position. For the base itself I elected to paint it in the RAF Stable Belt colours of light blue, dark blue and deep red rather than the "traditional" wood or black finish that I usually use. Hopefully this will draw any potential admirers to the figure for closer inspection.

finishing touches included the boots which were washed in sepia ink followed by some small amounts of white oil for highlights. the boots after a little internet research I found were plain leather soled so a little of almost every brown oil paint that I had was stippled onto the sole in succession to build up a worn look for the soles. finally a little light cream was used to show the stitching on the sole of the boot. The socks and jumper were next; this was kept simple. A wash of diluted lamp black was used and then wiped off the socks leaving the cream to show through and the "dirt & oil" left in the seams of the socks. A lighter wash was used on the jumper. The final stages inclued the rank stripe on the uniform arm, silver dry brush for the speaker on the pilots mask and cable plug and final touch ups for the helmet cables. The whole figure was then coated in Humbrol Matt Varnish and allowed to dry for 24hrs before final mounting on the base. 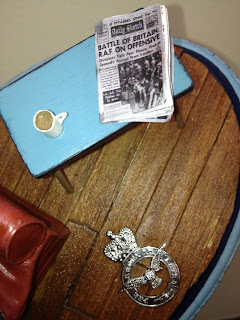 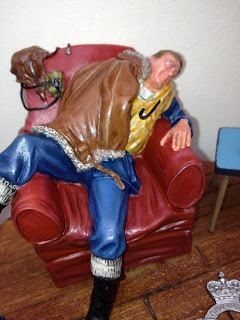 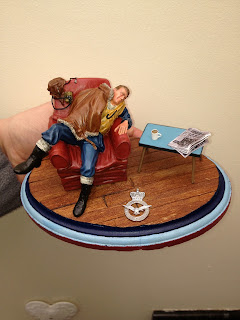 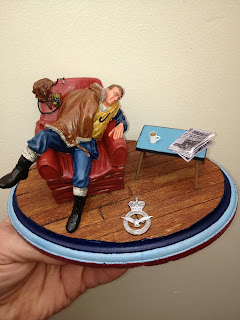